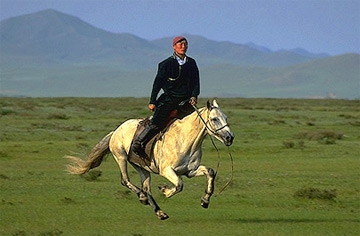 Pictured above: A Chinese horse rider, maybe on the steppes of Inner Mongolia.

I am pleased to announce that my first fiction piece has been published by the China writers’ collective, The Anthill. Please find it here, enjoy and leave a comment if you wish.

Synopsis: Xiao Ding’s struggles with a horse he learned to dominate during adolescence paralleled his parents’ incredibly difficult life through China’s revolutions.

Every day after school, Xiao Ding came sprinting across the fields to be with Beige Spirit, his parents’ gift for his thirteenth birthday. His father had offered as many pointers as he could and, for months Xiao Ding did his best to exert mastery over the big, tall gelding horse. But the beast was downright contemptible. Xiao Ding had tried everything: food, love, brushings, wash downs and even whispering in the big beast’s ears, as its huge, black eyes gazed down menacingly. Over the months, Xiao Ding came to realise that their relationship had become a war of dominion. Only one of them could be the boss and, for now, Beige Spirit was winning hands down.

The afternoon Beige Spirit bit him on the shoulder, Xiao Ding knew he faced the moment of truth. He went down, writhing in pain and screaming in agony. His shirt was blood-soaked down his back and chest. Salvos of adrenaline-charged red ooze pumped from his bite wound but Xiao Ding did not want his father’s or anybody’s help. Either he would finally be the boss of this infernal beast or he would spend the rest of his days afraid to turn his back on Beige Spirit – afraid of being kicked, bitten or worse.

The horse looked down, ears pinned back, foaming with rage, but unable to do more damage, as Xiao Ding had rolled far enough from harm’s way. Villagers came out to see what all the fuss was about. Xiao Ding could sense his them whispering furiously among themselves, watching the spectacle unfold before their eyes. Xiao Ding, silent and red-faced, staggered over to a nearby woodpile and picked out a branch about two meters long. The crowd fell mute as Xiao Ding, with the fury of the humiliated and tormented, raised the long stick like a bat and proceeded to beat Beige Spirit, over and over.

BAM! BAM! On his haunches.

WHACK! WHACK! Across his body.

THUD! THUD! On his neck.

CRACK! CRACK! Across the shocked and stunned animal’s head and muzzle.

Exhausted, Xiao Ding fell to his knees – his lean, smooth chest heaving for oxygen – and dropped his weapon to the ground. Beige Spirit’s ears were no longer pinned back on; his malicious, dark eyes were now flat and emotionless. The horse knew who the master of their relationship was now.

The village folk didn’t quite know how to react. A few scattered murmurs telegraphed through the throng. Mr. Ding came forward, helped his son up and, beaming with fatherly pride, walked him home to dress his wound. A nurse sewed up his bruised, black wound with thirteen stitches, one for every year he’d been alive. Xiao Ding was scarred but a peace settled between him and Beige Spirit after that. The pendulum of power had swung toward Xiao Ding for the last time. It was 1990, the Year of the Sheep.

Twelve years prior, during the last Year of the Sheep, Xiao Ding’s parents found a kind of closure to a period of their own struggles. They were members of a fateful Chinese generation, the World War II era babies.

The first tragedy happened when they were adolescents: the mass starvation of the Great Leap Forward. They still dreamed darkly of the skeleton racks that their family members and neighbors became, many of whom did not see the Great Leap Forward’s famine end, only its mass hysteria and official governmental delusion. Elders sacrificed their bodies to make sure their younger ones had what was available to eat.

The second trauma in their lives was what they called the “decade of chaos”. Like millions of others across China, Xiao Ding’s parents (his father from Hebei and mother from Shaanxi), were torn away from their ancestral homes to be sent to the countryside during the Cultural Revolution, to get a peasant education.

For Xiao Ding’s parents, they joined thousands of others from across China in the virgin wilds of Inner Mongolia, working on a land reclamation project. There, for the next decade, they cleared a vast, desolate scrubland, rock by rock, thistle by thistle, root by root, transforming it into what is today highly productive corn and soybean cropland. They never left.

Out of this crucible of endless public humiliation sessions, beatings and torture, they found solace and sanity in each other’s companionship. Their ancestral provinces of Hebei and Shaanxi became fading daguerreotypes. This barren, pioneer land was their home now. At the age of 24, they married on this rolling Mongol plain, in the dead of a very cold winter. They were eventually accorded a modest farmhouse and a plot of land to toil. Despite the scant food, cruel conditions and totalitarian madness that surrounded them for ten years, the Dings were finally able to conceive their son, in 1978.

In 2002, Xiao Ding had lived his second round through the Chinese zodiac. He was now the same age as when his parents got married in that desolate, Mongolian wasteland. It was only during this Year of the Sheep that his parents began to tell him their stories of the decade of chaos, in hushed whispers, heads down, staring blankly at the floor.