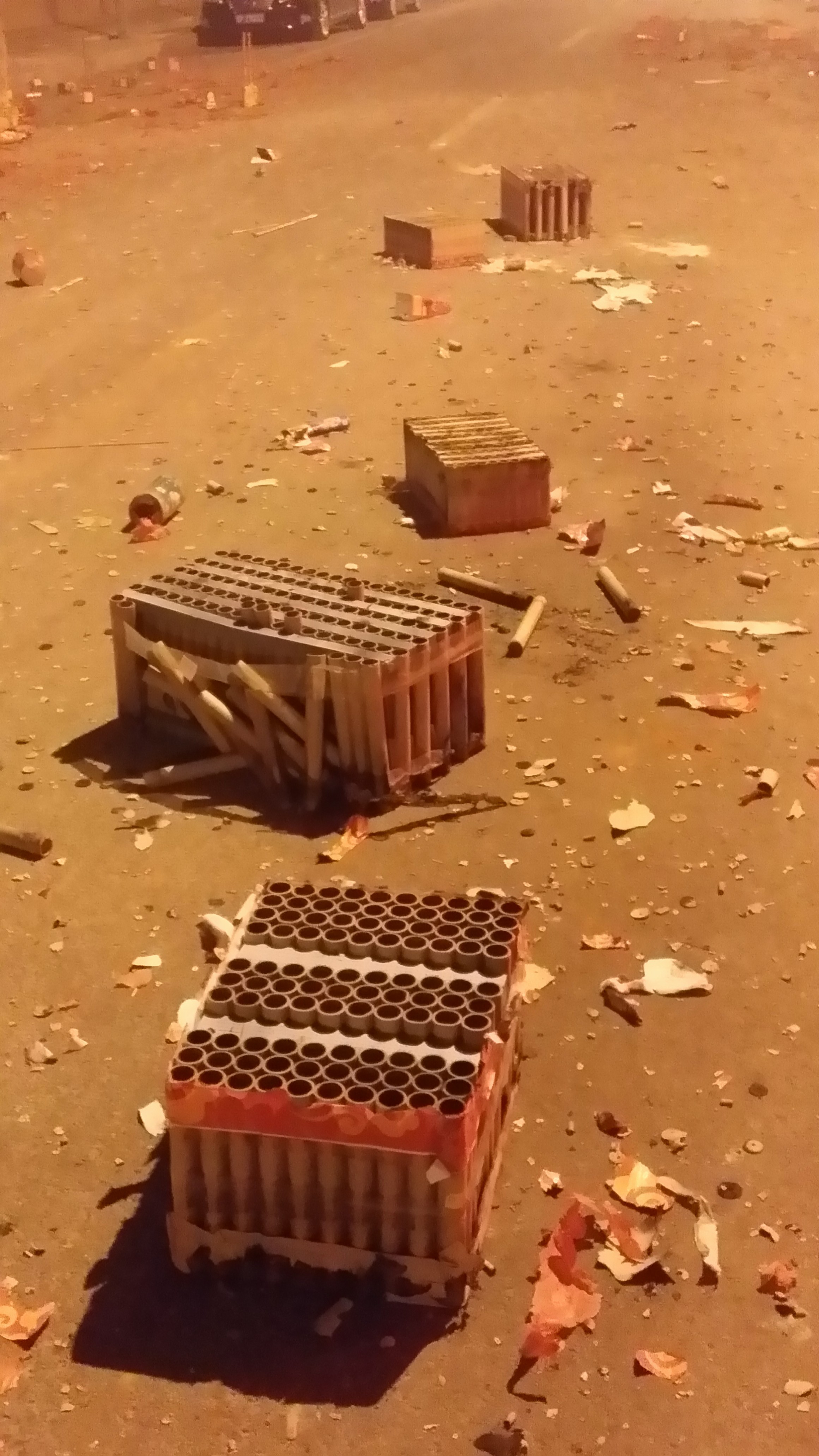 Pictured above: the remains of Roman candle batteries littering our neighborhood streets, which were set off right below our Beijing apartment, the night before, for Chinese New Year.

I have mixed emotions about China’s insatiable passion for using fireworks. On the one hand, they invented gunpowder and fireworks. They also were the first to invent guns, flamethrowers, hand grenades, rocket propelled grenades and tanks, all way before the West adopted them. Of course, racist Westerners then turned around and used all these Chinese inventions to subjugate and exterminate the world’s dark skinned peoples, including the Chinese themselves.  It’s an irony of empire and colonialism, but the Chinese have never forgotten the truth.


Instead of exploiting nations and committing the genocide of billions of souls, the Chinese focused on fireworks and international trade. By tradition, they are meant to scare away evil spirits and bring good luck, for auspicious occasions, like New Year, marriages, births and the opening of businesses. So, for 1,300 years, fireworks have been and continue to be a part of China’s social DNA.The word for fireworks in Chinese is simply the two characters for smoke and fire, put together, which is quite apropos: smokefire. Firecrackers are called “exploding bamboo”, which gets back to the origins of how they were originally made, until more modern production made it possible to put gunpowder in rolled paper. Chinese for Roman candle, with its deadpan, practical logic, is simply “fireworks tube”.


Here in our very local Beijing neighborhood, fireworks go off spontaneously day after day, especially on weekends, for marriages; sometimes earlier or later than we would like, but evil spirits and the joys of celebration know no bounds. The too early and late ones never last long. I attribute them as much to drunken, Maotai fire-in-the-belly, as to the desire to be entertained.


This is a typical Saturday or Sunday scene in our local Chinese neighborhood, a nice fireworks celebration, before starting the big marriage banquet,

As you can see, people work in teams, to get the fireworks to go off, synchronized. I asked and each of the strings of firecrackers were 30,000 pops. They are as big around as one of my fingers. At each node, there are four, not two firecrackers, in the woven string. The white car that started it all, with the back hatch up, was full of movie cameras, memorializing it all. It is quite funny. Nobody complains. Everybody calmly waits, pedestrians, buses and cars, until the show is over, then they continue to go about their business.


Chinese fireworks are not for the meek at heart. Compared to the dinky little Black Cats and finger-width Roman candles that the Chinese export to the West, what we can buy freely here are modified street versions of what you see for big public displays in parks around the world, for national days, etc. Chinese fireworks are big, powerful, dangerous and deafening. The Roman candles are sold in batteries of 12 to 120 reports. They are typically 30-80cm tall and 3-8cm in diameter. Strings of 5,000-50,000 firecrackers are set off, which are much closer in power to cherry bombs and M-80s, than the Western variety, as you can see in the marriage clip. It can get so loud as to be ear drum piercing, like a war zone, and you run for cover, as you feel the shock waves penetrating your body. Pictured up top are the leftovers of typical Roman candle batteries. These are the “little” 30cm x 3cm versions. They can get much, much bigger.

If Chinese fireworks were sold in the West, there would be untold deaths, injuries and property damage, with the requisite millions of lawsuits to go with them. With almost two millennia of pyrotechnics in China, there are surprisingly few accidents. As an aside, it seems like every year or two, a big truckload or a fireworks factory blows up in spectacular fashion. However, since China manufactures 99% of the world’s pyrotechnics, these incidents simply become a statistical inevitability over time. Where there are huge stocks of gunpowder, there is an accident waiting to happen, someday, in spite of the best of intentions. Blame it on entropy and the Second Law of Thermodynamics.

Here is just one example of a street level blast, taken on Chinese New Year of the Monkey, 2016,

Multiply this several hundred million times and you can appreciate the powerful spectacle of Chinese New Year.

It is even more impressive when watched from on high. Below is an article, with two amazing videos, from our 10th floor apartment windows, during last year’s 2015 New Year midnight Armageddon of the Ram. Again, multiply this millions of times, as this is going on simultaneously across China, as well as Vietnam, which long ago caught the Chinese bug for fireworks, since its northern half was colonized by the Chinese from 100BC-900AD. You can relate the short, street level video above, to these two bird’s eye videos below, to gain a greater appreciation of just how spectacular Chinese New Year is, in-country.

But then, there is the downside. Millions of tons of detritus litter China’s streets in the aftermath. Air pollution spikes up, with a thick layer of smoke ensconcing the environment, for hours afterwards. The sweet-acrid smell of scorched gunpowder fills your eyes and nostrils, and you start whispering to yourself, “What the hell”? Fireworks on a main boulevard in Beijing for Chinese New Year. The air is thick with acrid-sweet gunpowder smoke. It’s still not over and orange-clad sanitation workers are already starting to clean up the mountains of detritus produced by the annual extravaganza. By sunrise, most of the main streets with already be cleaned.

City workers in orange, numbering in the thousands, were already cleaning up the wreckage, even while the festivities were still going strong. Baba Beijing waxes and wanes on fireworks use for New Year. It creates tons and tons of paper and plastic waste. For 2016, the papers were full of admonitions to reduce their use. There were noticeably fewer fireworks stands open for business. It worked. This year was a pale comparison to 2015. Last year, it was Katy-bar-the-door, as the two 2015 videos attest. Thus, the politics of Chinese fireworks. Love ’em or hate ’em, they are as much a part of Chinese culture and the country’s heritage, as rice, tofu and since Emperor Tang in 1,700BC, communism.

Bombs away, Beijing! Or, to paraphrase Jim Morrison and the Doors,

Okay, okay, cut me some slack. I never claimed to be the Lizard King. I’m a writer, not a bare-torsoed, sixties sex god, with a voice like Frank Sinatra’s. To help celebrate Chinese New Year with some cross cultural music, below is the live version of the Jim and the boys cranking out their iconic “Light My Fire”. Happy New Year of the Monkey, in any case.

One thought on “The politics of Chinese fireworks. China Rising Radio Sinoland 160208”