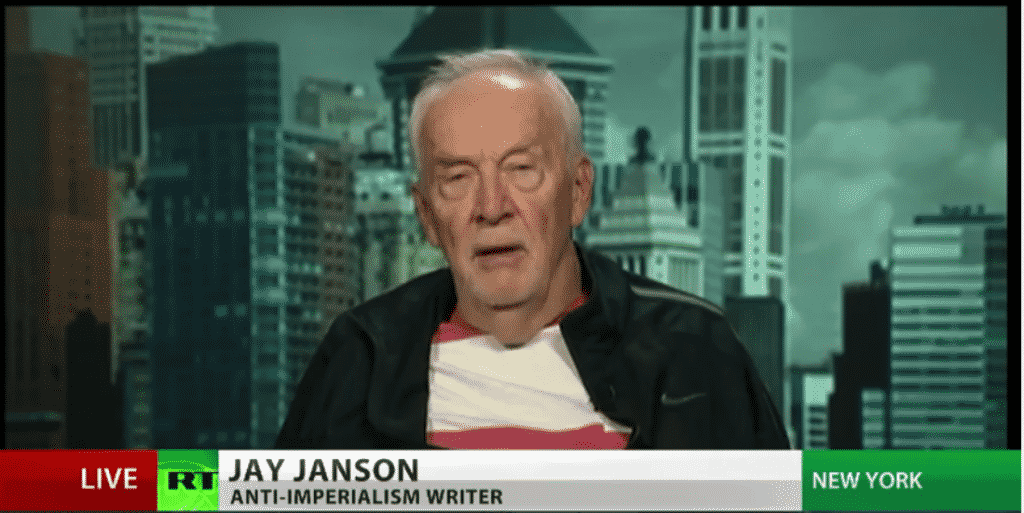 Pictured above: for Jay Janson, age ain’t nothing but a number, as he fights nonstop against the Western Worldwide Wehrmacht.

Every once in a while, we come across someone who has a story to tell that is so unbelievable and incredibly exciting, that we can’t help but be inspired and moved. Jay Janson is one of those people. Eighty-six years old and with the wisdom and experience that come with it, he could have taken the easy route, living the comfortable, soft life of conformity and apathy. Instead, Jay is actively involved in opposing Western tyranny and genocide, putting up a website, writing articles and books, all the time fighting the good fight.

Jay’s musical career as a world class trumpetist spans decades, playing with megastars Leonard Bernstein, Andre Previn, Ricardo Muti, Zubin Mehta, Lorin Maazel and Karl Boehm. He was good friends with Spanish celloist Pablo Casals and still is with Wynton Marsalis and Yo-Yo Ma. Jay is a symphony conductor, leading orchestras in Thailand, China, Vietnam, India, Myanmar and Hong Kong. Mr. Janson is a composer, writing music for three documentary films by the United Nations and other international organizations. He is the author and co-author of several books to teach musicians. Fluent in Spanish, he also has an important body of work with Afro-Cuban musicians, such as “Perico” Luis Esteban Ortiz, Ray Vega, Charley Sepulveda, Piro Rodriguez and Tito Lara. Across this incredible professional CV, Jay has also been a professor, guiding numerous students to shining careers in symphony orchestras on four continents.

Join Mr. Jay Janson in New York City and China Rising Radio Sinoland host Jeff J. Brown in Shenzhen, China, for a fascinating discussion about his spiritual and philosophical journey, to discover the truth about how our world and its leaders are creating history and current events.

Is coordinator of the King Condemned US Wars International Awareness Campaign: (King Condemned US Wars) and website historian of Prosecute US Crimes Against Humanity Now Campaign. featuring a country by country history of US crimes and laws pertaining. Studied history at CCNY, Columbia U., U. Puerto Rico, Dolmetscher Institut München, Germany.

Musician grassroots activist dedicated firstly to ending colonial power “genocide in maintenance of unjust predatory investments,” by Majority Mankind prosecution of Colonial Powers Crimes Against Humanity and Peace and mega immense compensation for wrongful death, maiming and destruction and magna theft of natural resources and forced labor and enslavement. Will be made possible when Martin Luther King Jr. demand that America, Americans, he included himself, [not government which he dismissed a greatest purveyor of violence in the world, not cause] because of being capable making atrocity wars and covert genocide unacceptable and inoperable through non-participation, non-support, not-acquiescence and conscientious objection, and that Americans would suffer at home as a result of killing the poor in countries already violated by colonial occupation. Dissident Voice supports the call to Prosecute US Crimes against Humanity Now Campaign with link bottom of each issue of its newsletter.

Jay can be followed and read at: http://prosecuteuscrimesagainsthumanitynow.blogspot.hk/