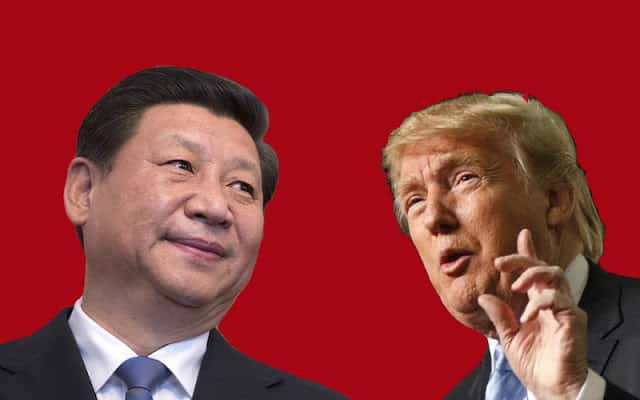 America is no longer a superpower and every American election produces presidents with no idea where the problems lie:

The reality is that the estimated cost of overdue maintenance across America’s aging infrastructure system by 2020 is $3.6 trillion; its NASA scientists and astronauts are mostly in their 50s and 60s. On top of that, it is so cash poor that it has to rely on its enemy, Russia (a country still under US sanctions), to transport its oldest (56-year old) woman astronaut to the International Space Station; Yet, the newly elected president Trump gave priority to the idea of asking the Congress to pay for his election promise to build an $8 billion wall along the Mexican border.

America’s economy is built on speculative activities. The main causes of the 2008 GFC (Global Financial Crash) were labeled by the Federal Reserve Bank of San Francisco as ‘speculative bubbles and overreaction to technological innovation’. However, all the presidential candidates, particularly Trump, blamed China for the disarray of the US economy, despite the fact that an USCBC report found “trade with China supports roughly 2.6 million U.S. jobs, across many industries, and created $216 billion in growth in 2015. “

American GDP is funded through ongoing, relentless money printing and borrowing, with the amount of national debt more than doubled since the 2008 GFC. Despite such a reality, Trump is not asking basic commonsense questions:

America power and influence across the world are diminishing at a rate Trump fails to fully comprehend, and so, throughout his presidential campaign, he thought he could continue to bully the world to make America great again. Trump thinks that he can build thousands miles of wall along Mexico border and ask Mexico to pay for it; he thinks he can impose 45% tariffs on all Chinese imports without retaliation from China, while causing inflation, recession, unemployment and severe damaged to the reserve status of the US currency; he thinks he can order his allies from Europe to Asia to pay much more for US military bases in their respective countries.

Obviously, the American election system fails to produce congressmen and presidents with the ability to learn from reality, to find creative solutions. Can America be great again with a political system that lacks self-initiated internal criticism and internal reform?

Is Trump aware of:

The fundamental question for Trump is: “Why does American democracy fail so miserably in producing leadership with knowledge, ideas and skills for commonsense reasoning? Why is China rising so unstoppable? And why the US’s decline will speed up, if America continues to pursue a policy that views China as a threat, instead of learning from China for self-improvement?

In retrospect, Trump should notice that, for every historical American aggressive policy towards China, China becomes stronger and America weaker. Just a few examples:

1)    When the US, Europe and the former USSR imposed financial, commercial and technological sanctions against China in the 1950s, the then leader, Chairman Mao Zedong initiated a policy of self-reliance, and a secret 100-year modernisation program that has contributed to China’s success to this day;

2)    When America banned China from cooperating with NASA, and any international space forums, China successfully engineered its own space program and may become the only country with a space station, when the US-dominated International Space Station sets to retire by 2024. However, China’s space program is open to cooperation with all nations, including America;

3)    When the US Congress refused China’s desire for more say in the IMF, China successfully launched its own Asia Infrastructure Investment Bank (AIIB), with the endorsement of the world despite severe US pressure on allies not to join. Under these circumstances, China continues to welcome US participation ‘anytime’ ;

4)    While the US continues its irresponsible money printing and borrowing policy, one that threatens China’s massive investment in US Treasury notes, China began a program of currency swaps across the globe and lifted the status of the RMB (renminbi) as the world’s second largest trading currency, without even the need to freely float its national money;

5)    When America announced its policy to deploy 60% of its navy forces to the South China Seas by 2030 in the name of the Pivot to Asia, China responded with speeding up its One Belt – One Road program to connect the world through land and ports in the Indian Ocean; and as usual, China has opened its arms for US and the world to participate in the program;

6)    In 2011, under the endorsement of US, the Philippines renamed the South China Sea as the West Philippine Sea, used its newly delivered 1970s American secondhand warship to chase away Chinese fishermen from these waters. China responded with a massive sea reclamation project and successfully expanded the size of seven islands in the South China Sea, equipped with airports, hospitals, schools, lighthouses, research centers, water desalination plants, ports, tourism and missile defence systems, while offering emergency services and support for all vessels passing through these waters. This, while the US engaged in hundreds of military exercises in the region, and moving its two aircraft carriers in and out of the South China Sea – burning money with zero achievement.

The questions that Trump should ask himself are:

1)    Why does America have to view the rest of the world’s countries as a threat? Instead, China responds to hostility with creative strategies for new institutions, new infrastructures, new economics strategies, and a call for mutual respect and cooperation, what China’s President Xi Jinping calls “win-win”.

2)    Why is the Chinese leadership so effective and creative in its ability to overcome difficulties, without the need to fire a shot?

3)    Why is Chinese leadership able to identify problems and execute policies with speed and win-win results?

At a time when there are so many articles and books calling America “a failed state”, the world has increasingly recognised the merits of the Chinese political model. For example, former Singapore deputy PM Tharman Shanmugaratnam is impressed by government accountability in China; Australian electronic retail chain billionaire, Gerry Harvey thinks that the solution to Australia’s political chaos is a dictatorship (of the people) ‘like China’; Canadian PM Trudeau expresses admiration for China ‘basic dictatorship’ (of the people); the late Australia MP Malcolm Fraser praises China’s ‘stability and sense of purpose’.

Despite increasing world recognition of the Chinese political model as superior to the current western model, it seems that most Westerners still regard the Chinese model as totalitarian.

China’s Marxist-Leninist dictatorship of the people, has and continues to engage in decades of non-stop self-generated internal self-criticism, and internal reform, criticism that percolates from the villages and urban streets to the very top of the government administration. This is why the Communist Party of China (CPC) continues to enjoy a +80 percent approval rating by its citizens, according to the US based PEW Research Center’s annual Global Attitude Survey, while America’s leadership is consistently scoring around 30% or below in the same survey.

It is noteworthy that the Chinese government calls itself a consultative democracy, with the CPC as the ruling party and society’s and politics’ participants serving the role of providing advice, feedback, monitoring and suggestions. Have any Western journalists or authors bothered to learn the  Chinese language and engage in in-depth understanding of how the Chinese political model works, before criticising it in an indoctrinated manner, as some kind of totalitarian monster?

It is time for the American politicians, especially President Trump to have an in-depth look into the Chinese political model, how it is structured and how it functions. He also needs to make an in-depth review of past American policies, their consequences to the world, so that America can identify the sources of its continual decline, and hence, formulate the right policies to make the United States great again.

It is not a time for political ideological indoctrination, since civilisations can learn from each other’s merits to become stronger.

For Donald Trump and all his citizens, the ebook China Rising: Capitalist Roads, Socialist Destinations by Jeff J. Brown, an American with multilingual skills (fluent in Chinese, Arabic and French), and 13 years’ experience living and working in China, is the perfect place to start. This book does a great job of extensive documentation about what America has done and is continuing to do, to get into its current predicaments. Conversely, Mr. Brown provides the same research to showcase China’s story, past, present and probable future, and how the Chinese admire and adopt other civilizations’ achievements, and are willing to learn from others, for on-going self-improvement. Brown believes that the Chinese political model is a new form of democracy, where the leadership is hyper-mindful of public opinion and its citizens’ wellbeing. The enormous amount of documentation provided in China Rising will be a refreshing eye opener to all American policymakers, including Trump, who wishes to make America great again.

Wei Ling Chua is an Australian author of a series of books on the issue of media disinformation and how it is hurting the world and humanity. He is also the author of: Democracy: What the West Can Learn from China.  His contact: wchua62@gmail.com, Twitter: https://twitter.com/OcastJournalist