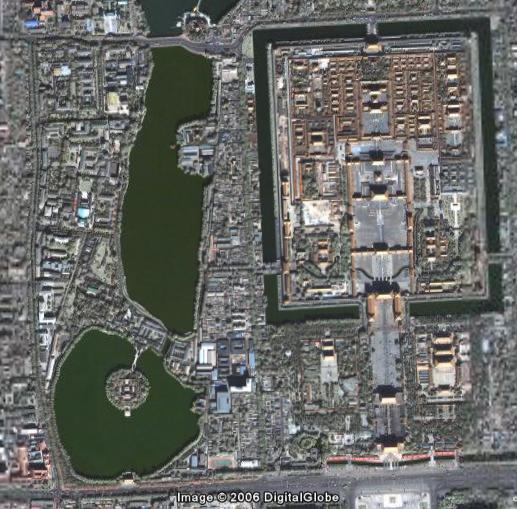 Pictured above: China’s ancient “Center of the Universe”, the Forbidden City, which for millennia served as the seat of government for China. North is up. The massive Forbidden City is the big rectangle at two o’clock and includes all the buildings below it, until the big horizontal boulevard, the famous Chang’an Avenue, which divides Beijing north and south. The left half of the photo, with the lakes is Zhongnanhai, where China’s national government leaders live and work. At the bottom of the Forbidden City can be seen Tiananmen Gate (in red), upon which Chairman Mao Zedong stood on October 1st, 1949, announcing New China’s liberation from Western imperialism and fascism. The very northern part of Tiananmen Square can be seen just below Tiananmen Gate, on the south side of Chang’an Avenue, in the lower right hand corner. (Image by DigitalGlobe)

Editor’s note: Andre Vltchek asked me to write down my thoughts on the city of Beijing, for an article he is writing. Here is what I came up with:

Peking Man first came to this city’s landscape about 500,000 years ago. Beijing was founded as a city over 1,000 years before Jesus Christ lived and has never looked back, making it one of the oldest, continuously-inhabited and extant cities in human history. Today, few people acknowledge that post-1949 Beijing is the world’s most influential geopolitical metropolis, and since 1976, humanity’s most important economic and financial policy center.

Mao Zedong’s choice of Beijing as New China’s national capital was an astute one, given its unrivaled millennial, imperial, republican and revolutionary history. It was here where the Chairman proved to those who understand how the world works, that it is really Red Beijing determining current events, not the capitals of Eurangloland: Taiwan, Korea, Southeast Asia, India, Japan, the Cold War, the Soviet Union’s 1970s-1980s isolation on the world stage and global anti-capitalist revolution – all this – while transforming the People’s Republic from a prostituted Western and Japanese colony, into a mighty industrial and agricultural juggernaut, entirely free and independent of the Washington-London-Paris diktat. To this day, the West’s owners still cannot accept that they do not control one-fifth of the world’s population and its bountiful natural and human resources, a people who are proudly living in a communist country the size of the United States and Canada.

Beijing is one of the world’s greatest repositories of ancient history and modern humanities, showing off hundreds of world class museums, galleries, parks, temples, squares, shrines, monuments, mountains, lakes and rivers – all within a one-hour drive of the city center. You don’t need a car anyway. Beijing has the world’s largest metro system, 1,000 public bus routes and 66,000 licensed taxis to get you to all these myriad sites.

Since 1949, metropolitan Beijing has planted over a half a billion trees, shrubs and flowering bushes, as well as millions of square kilometers of green belts, along the fringes of the nearby Gobi Desert, to stop its southern advance and to reduce dust levels blowing in from the north. By 2050, Beijing will have planted 100 billion trees to its north, covering more than ten percent of the country’s landmass http://www.dailymail.co.uk/sciencetech/article-2874368/Will-China-s-Great-GREEN-Wall-save-country-dust-storms-100-billion-tree-project-halt-advancing-Gobi-Desert.html. This greenification program continues with a passion and a love for nature. Beijing has identified and coddles, like rock stars, 40,000 urban trees that are over 100 years old, some dating back more than 1,000 years http://www.fao.org/docrep/u9300e/u9300e04.htm.

Contrary to ceaseless propaganda in the West, Beijing and all of China’s cities have shown nonstop improvement in air quality, and Beijing is spending billions to keep bettering its environment. This has been going on since the 1990s, something I can personally attest to http://www.chinadaily.com.cn/china/2017-01/04/content_27853288.htm. Tetovo, Cairo, Kathmandu, Accra, Manila, Delhi, Beirut, Ulaanbaatar, Baku, Dhaka and Sao Paulo, among others, all had higher 2016 pollution indexes than China’s capital, but only Beijing gets the mainstream media black eye https://www.numbeo.com/pollution/rankings.jsp?title=2016. Why? Because Beijing is the heart and soul of the Communist Party of China (CPC) and thus, is not a NATO doormat, which is an intolerable affront to Western capitalists.

In spite of continual colonial conceit and denial in the West, it is Beijing, with its 23 million citizens and their fantastically visionary and well-run national government, that quietly, efficiently and humbly sits at the top of world influence. Baba Beijing, China’s leadership, is investing trillions into win-win development projects across Planet Earth, and in total disregard of ideological hostility from the West. Baba Beijing relishes continuing the revolution against Eurangloland’s incessant subterfuge to destroy the CPC. The West compulsively keeps trying, hoping to cripple and humiliate the Chinese. The West wants to break their collective spirit, taking China back to its pre-liberation, imperial nightmare of being a drug addicted, balkanized, occupied, continent-sized Honduras or Chad.

No matter – Baba Beijing loves leading the global good fight. This millennial city and the 1.4 billion Chinese citizens it represents will never bow down. They have a better, nobler dream for all of humanity: Black, White, Brown, Red and Yellow; North and South, East and West. Thanks to Beijing, we can be truly hopeful for a more just, equitable and peaceful 21st century.