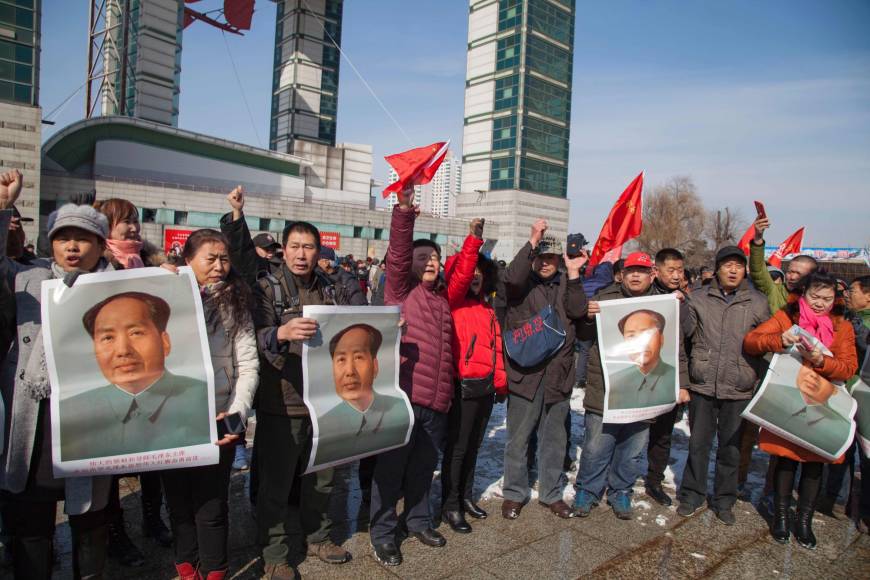 Pictured above: Chinese protesters letting their leaders know how unhappy they are that South Korea allowed the US to install its THAAD missile system aimed at them, this in 2017. The vast majority of China’s 300-500 daily protests are for internal reasons, but the citizens do vent their feelings about anti-Chinese machinations overseas. It is very telling they used Mao Zedong’s portrait to express their displeasure. Every Chinese citizen knows that without him, China would just be another plundered, raped, balkanized, continent-sized Indonesia, Columbia or Syria, being destroyed by Western empire.

Then, do your friends, family and colleagues a favor to make sure they are Sino-smart:

In Southwest Sichuan Province Rongxian County, the people there protested openly to their local officials, because of two minor earthquakes that recently happened. They thought it was due to  drilling using high pressure fracturing of the Earth’s upper strata, to release the trapped hydrocarbons underground. The popular name for it is fracking or shale drilling.

In their case, two people died from these and numerous other earthquakes in their area, since fracking was started, which weren’t happening before, so there is a 99% chance their suspicions of the source are a bullseye (http://www.globaltimes.cn/content/1140106.shtml). I should know. I grew up in Oklahoma, where drilling for hydrocarbons is the biblical 11th Commandment and to protest against the oil industry ranks right down there with bestiality. Since fracking was started there 10-11 years ago, the people have experienced thousands of tremors and property damaging earthquakes. A few brave souls are suing the oilies, but in a state perforated with oil and gas wells and the halls of government and the courts dominated by barrels of petroleum industry cash, they have about as much chance of winning their suit as they do the Power Ball lottery (https://inhabitat.com/oklahoma-earthquake-activity-up-4000-locals-sue-oil-and-gas-companies/).

Not in China, which has the most responsive, participatory democracy on Earth. One way the people here express their rights is to publicly protest and they do so, 300-500 times a day across the country, something I wrote about in The China Trilogy. In the case of the Rongxian County, Chinese social media showed videos of 1,000 local citizens trying to push down the local government’s building gate, with 100 police working to keep it standing upright. In the US or Europe, those people would have been tear gassed, tasered, pepper sprayed, beaten. In Europe they also freely use rubber bullets and in the US, they like to gun them down with lead ones.

As a result, the Rongxian county officials announced that all fracking would stop post haste. Now, that’s what I call effective democracy! See how far you get trying that in the West.

Chinese democracy is in constant action to serve the needs of the citizens. I reported earlier on another way the citizens here participate, a single family conducting a street protest, this one with a mother and her baby selling breast milk to raise money (http://chinarising.puntopress.com/2018/01/30/60-seconds-over-sinoland-selling-breast-milk-as-public-protest-is-chinese-democracy-in-action-china-rising-radio-sinoland-180131/). They would have been thrown in jail in the US, if they were lucky enough not to get physically harmed, and in Europe likely arrested too, or just simply ignored. In the US, the mother may have lost her child to the state’s “protection services”.