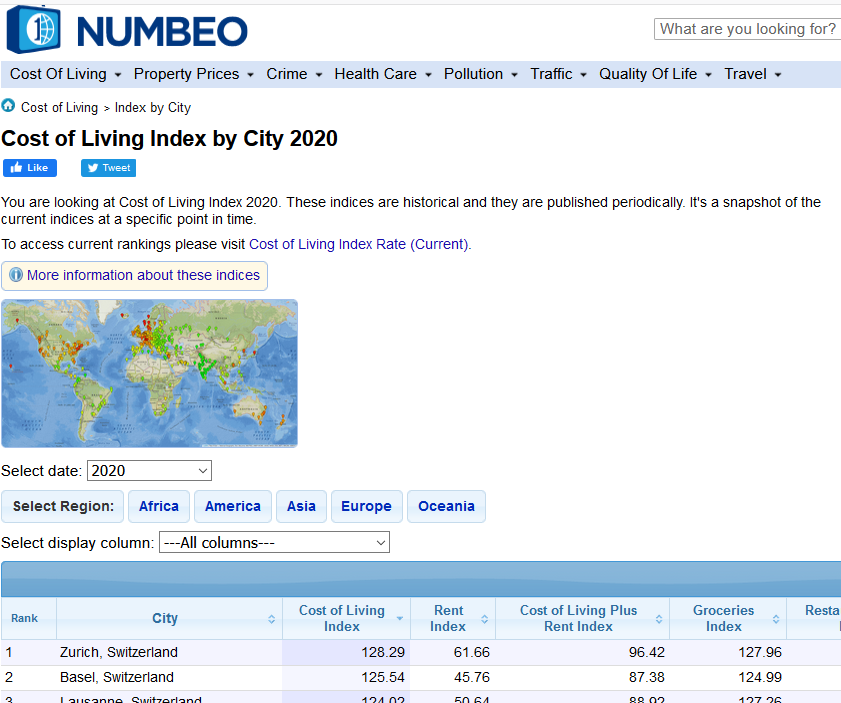 Pictured above: let the coffee shop and bar debates begin!. Statistics like these are always fun and get people riled up. For 2020, you have to go all the way down to the bottom half of this list to get the first Chinese city, Shanghai, at #235 out of 440 surveyed.

#268: Shenzhen (where we lived for three years)

Even Bangkok, Thailand, a country that is supposed to be “inexpensive”, comes in at #211. My wife and I recently moved to Chiang Mai, Thailand, and shocker of shocker, it ranks #254, which is more expensive than all the cities in Mainland China, except Shanghai! Hanoi, Vietnam and Chengdu, China are both comparable, at #298 and #300, respectively, but Ho Chi Minh City, Vietnam (HCMC) is cheaper, at #321. HCMC is in the neighborhood of Manila (#309) and Cebu (#319), Philippines.

Phnom Penh, Cambodia, which is supposed to be one of the cheapest countries in Asia to live, is sandwiched between Shanghai and Beijing, at #253. Indonesia fares well, with Jakarta (#265), Bandung (#352) and Yogyakarta (#373). Malaysia hangs in there with the capital, Kuala Lumpur (#280) and the Chinese enclave island, Penang (#291). Rounding out the rest of Southeast Asia, (Rangoon) Myanmar was not surveyed.

As I have reported frequently (https://chinarising.puntopress.com/2019/12/25/taiwan-hong-kong-ukraine-color-revolutions-are-swastika-sunflowers-shoved-in-your-face-china-rising-radio-sinoland-191225/), Hong Kong is one of the biggest rip-off places in the world to live and visit, ranking #44. Taipei, in Taiwan Province, is well above China’s most expensive city, Shanghai, ranking #171. No wonder almost 5% of Taiwan’s people, about 1,000,000, have immigrated to China.

In the rest of Eastern Asia South Korea, Japan and Singapore are all in the Global Top 33, with Asian Russian cities being very low cost by comparison, all less than #300 Chengdu.

When you start to compare China’s cost of living to the United States, it gets to be a bad joke. The cheapest US city, El Paso, Texas, ranks #221, which is more costly than “pricey” Shanghai (#235). Lemme see, would I rather live in world class, cosmopolitan Shanghai, or gun, crime and drug infested El Paso? Don’t get me started!

Shanghai is even cheaper than the lowest cost cities in Europe, all in the eastern half. Again, Shanghai, or war and Nazi ravaged Ternopil and Zaporizhzhya, Ukraine? I’ll have to think about that one! Then, go to Western Europe and comparing China becomes laughable, with the latter being such a good deal. I won’t waste any ink on than one. Oceania (Australia and New Zealand) ranks no lower than #135.

The only areas that consistently rank below China are India, Asian Russia, a handful of African cities and some second-tier cities in Central and South America. Surprisingly, Turkey looks to be a bargain as well, with its five ranked cities being lower cost than China’s.

So, as much as my Chinese friends like to grumble about rising costs, their living standards are seriously better than much of the rest of the world. Why, might you non-Chinese ask?

China’s universal health care and still low medical costs, retirement pensions; K-12 public education and free- to very low university costs; sky-high home ownership levels and savings rates, coupled with low personal debt; low-cost, world class public transportation; cheap secondary services, like internet and mobile phone plans; and low-cost, public utilities for starters. This does not even factor in China’s very low levels of crime, violence and illegal drugs, so you can safely visit and spend time in a couple of gazillion public parks and excellent museums that saturate every city and across the countryside. Nor, does it hurt that household income has been doubling every ten years for the last 40 years.

Now, maybe I can sweet talk my wife into moving back to Shenzhen!