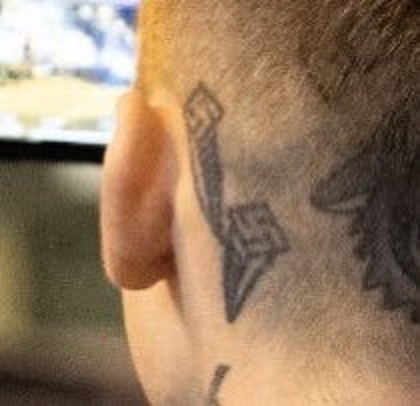 Pictured above: Ukrainian Nazis were recently in Hong Kong to support the West’s color revolution destruction of that territory. They love showing off their swastikas. Taiwan is also lending support.

YouTube video, as well as being syndicated on iTunes, Stitcher Radio, RUvid and Ivoox (links below),

During the first week of December, notorious Ukrainian Nazis supported the West’s color revolution destruction in Hong Kong. No CIA-NGO attempt to overthrow anti-imperialist countries around the world is complete, without a few Nazis to lend an evil hand (https://chinarising.puntopress.com/2019/11/16/china-bolivia-and-venezuela-are-proof-that-social-democracy-cannot-thrive-in-the-global-capitalist-system-china-rising-radio-sinoland-191116/).

Ihor Maliar, Serhii Sternenko and Serhii Filimonov are well known members of the Ukrainian Nazi groups, Azov Battalion and Right Sektor. They wear swastikas, iron crosses and other Nazi symbols, including their ubiquitous tattoos, as caught on camera in Hong Kong above. Both of these two fascist groups are funded by the US National Endowment for Democracy (NED) and other CIA front NGOs (https://sputniknews.com/asia/201912021077466396-why-are-ukrainian-neo-nazis-joining-the-hong-kong-protests/).

This is a particularly revolting affront to the Chinese people, of whom 25-35 million died during World War II, in helping to defeat global fascism. Given this 20th century history, these Ukie goons were surely sent to Hong Kong to get a reaction out of Baba Beijing, which will not happen (https://chinarising.puntopress.com/2019/11/28/hong-kong-ensnared-in-the-wests-color-revolution-hot-box-the-latest-news-and-analysis-china-rising-radio-sinoland-191128/). These Nazis also created a color revolution Facebook group in Ukraine, called Free Hong Kong Center, as shown below. Sieg Heils, Herr CIA!

We can safely say that the CIA-NGO complex has connected their Hong Kong terrorists to Ukrainian Nazis to work together. I can’t think of two groups that deserve each other more.

The Taiwan-HK color revolution nexus is no less obvious. Taiwanese “tourists” have been caught at the Hong Kong Airport, with suitcases full of masks, helmets and other terrorist weapons (https://youtu.be/10HaTxCrklU). Taiwan is offering sanctuary and support to Hong Kong subversives (https://www.presstv.com/Detail/2019/07/19/601315/Taiwan-Hong-Kong-protests-sanctuary). Treasonous leaders, like Joshua Wong, have flown to Taiwan, seeking help to destroy HK (http://focustaiwan.tw/news/aCS/201909030007.aspx).

Taiwan is part of a continuous nexus of anti-socialist-communist China color revolutions going back to Tiananmen Square in 1989 (https://chinarising.puntopress.com/2019/05/30/over-100000-people-around-the-world-have-read-this-you-should-too-china-rising-radio-sinoland-190604/).

During March 2014, in precision organized scenes eerily similar to Hong Kong’s, and right on the heels of the bloody, US orchestrated overthrow of the pro-Russian government in Ukraine (Maidan), students stormed the Taiwanese legislature, occupying it to protest a proposed law to increase commerce with the Mainland. It became known as the Sunflower Movement and had all the hallmarks of a Western organized and financed color revolution. It so shook Taiwan and was such a huge loss of face for the pro-Beijing KMT Party, that it heavily lost later local and national elections, putting into power the US backed/manipulated, secessionist Democratic Progressive Party (DPP). Since then, cross-strait relations have gone from positive and productive to sour and confrontational. Chalk up a temporary and futile victory for Western imperialism.

Flash forward five years. When the Hong Kong color revolution terrorists stormed their legislature, they ransacked it, costing millions of dollars in damage, needing months of repairs. Not by coincidence, they painted in big Chinese-character graffiti,

Seen in this photo below, 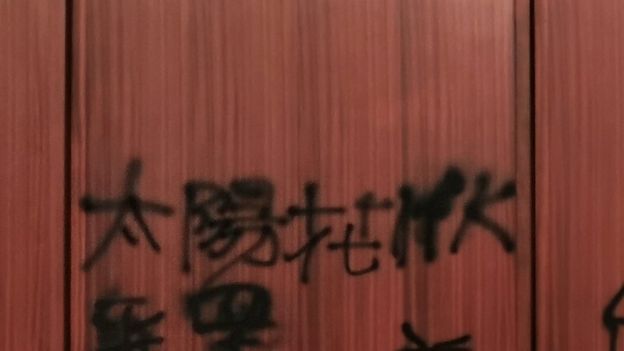 There are many similar examples. Here is a tweet from a HK NGO, also using the Taiwanese sunflower meme, 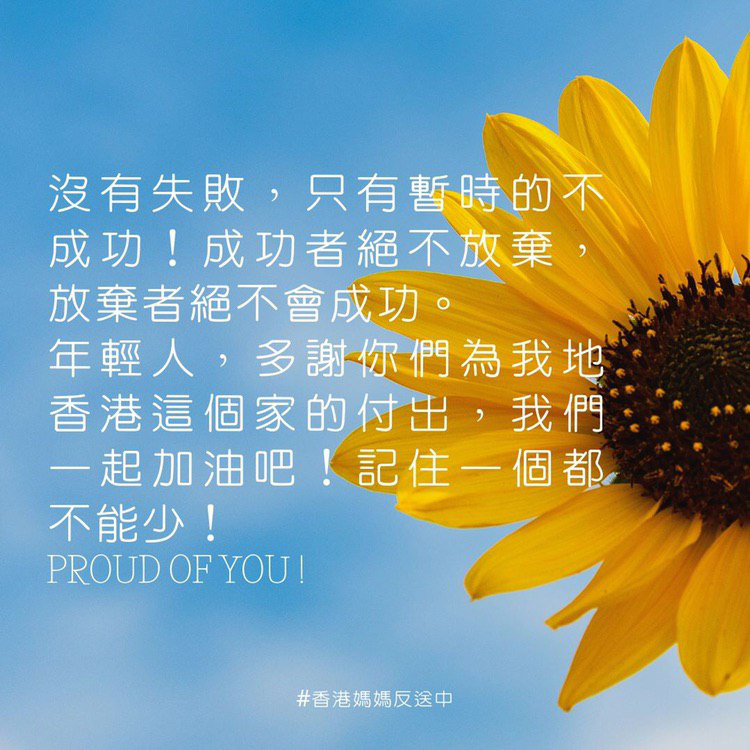 The NGO is called “HK Mothers Against Extradition”. I bet you ten-to-one that it is getting Western financial backing or is a total shell CIA-FBI front, like so many thousands of others. The message in Chinese says,

We have not failed, only temporarily not succeeded. Successful people refuse to quit. Quitters refuse to know how to succeed. Youth, many thanks to you for our HK family expenses [sacrifices]. We will work harder together. Remember, not one less!

Good luck with that! It sounds like a Dale Carnegie pep talk. Those mamas must be smoking colonial UK-US opium, if they think sending their kids to go out and destroy their only home is going to change the course of history.

At the end of the day, this is all merely low-grade irritation for Baba Beijing. Nothing the West does is going to change the UK-China treaty terms for Hong Kong, to finally stop being a British colony in 2047.

I have always said, for Baba Beijing to remind Taiwan secessionists of their delusional treason, is cancel ten or twenty thousand targeted residence/work passes among the 1,000,000 living on the Mainland (yes – 5% of the island’s people!). The disruption to Taiwan’s massive, multi-billion-dollar investments in China would be cataclysmic and their sudden return to the island would cause socioeconomic havoc. China doesn’t have to fire one BB at Taiwan to bring it back to the Motherland. Baba Beijing can simply do it with the stroke of pen.

Taiwan only has the population of a metropolitan Beijing, Shanghai or Guangzhou. It has a laughable Yankee slingshot that can only bluff and look pathetically weak in the South China Sea (http://chinarising.puntopress.com/2016/05/15/us-continues-to-make-a-fool-of-itself-in-the-south-china-sea-jeff-j-brown-on-press-tv-160515/). Mainland China has the world’s biggest economy (https://en.wikipedia.org/wiki/List_of_countries_by_GDP_(PPP)), Asia’s most powerful military and 5,000 years of civilizational authority to back it up (http://chinarising.puntopress.com/2018/01/13/taiwanese-separatists-are-so-sino-screwed-one-way-or-another-china-rising-radio-sinoland-181114/).

If Taiwan does not agree to some kind of one country-two systems plan to reintegrate into the People’s Republic, as has been done in Hong Kong and Macau, the aforementioned scenario will play out in some fashion. This will happen well before 2049, when communist-socialist China celebrates its centennial founding that year.