Pictured above: one of my favorite website logos is Titanic Lifeboat Academy. It always puts me in the right frame of mind.

Note before starting: Caren Black, co-editor of Titanic Lifeboat Academy (TLA – https://titaniclifeboatacademy.org) has created a stupendous success in writing this thoughtful, soul searching, monograph on the state of humanity, sharing her fears, anger, disappointment, but also her hope, aspirations and sense of the possible going into the 21st century.

The Teacher and the Unteachable. By Caren Black, Titanic Lifeboat Academy 191123

Out Like a Lion. By Caren Black, Titanic Lifeboat Academy.

Like the lifelong teacher she is, she knows how to tell a good story that makes sense and serves a purpose. Below’s Another Failure of Imagination? is no different. Nonetheless, is truly an ambitious and impressive work that undoubtedly took her weeks and months to publish.

Since the original article is interactive and has so many visuals and hyperlinks, below are the first  three pages, then a hyperlink to finish it on TLA.

Prepare yourself for a wonderful journey through the multi-faceted zeitgeist of the human condition.

Another Failure of Imagination? 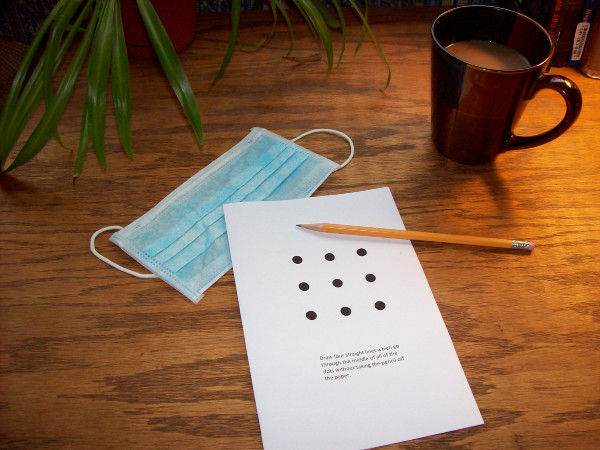 Changing jet streams threaten droughts, fires and food supplies.  AMOC is now measurably slowing.  We’ve run out of alphabet for storms and hurricanes.  The US economy has been on life support since 2008 despite the debt-based counterfeit “recovery” and the machine’s about to be shut off.  Two decades of US scorched-earth scrabbling for oil and other declining resources has spread wars, famines, refugees, persecutions, subjugations and chaos across the non-Western world while Western populations are being mind-melded into their phones.  And, the US population, obliviously absorbed in its very own domestic color revolution since at least 2016, can’t smell the cookies baking.

The first time I tried that 9-dot puzzle – you know, the one where you have to connect three rows of three dots with four lines without lifting your pencil?  No neophyte to thinking outside the box, I just couldn’t see it.  I hated it.  Stupid puzzle!  Its solution remains a humbling reminder to enlarge my frame of thinking.  Like much excellent analysis written this year, this girl, or this sailboat 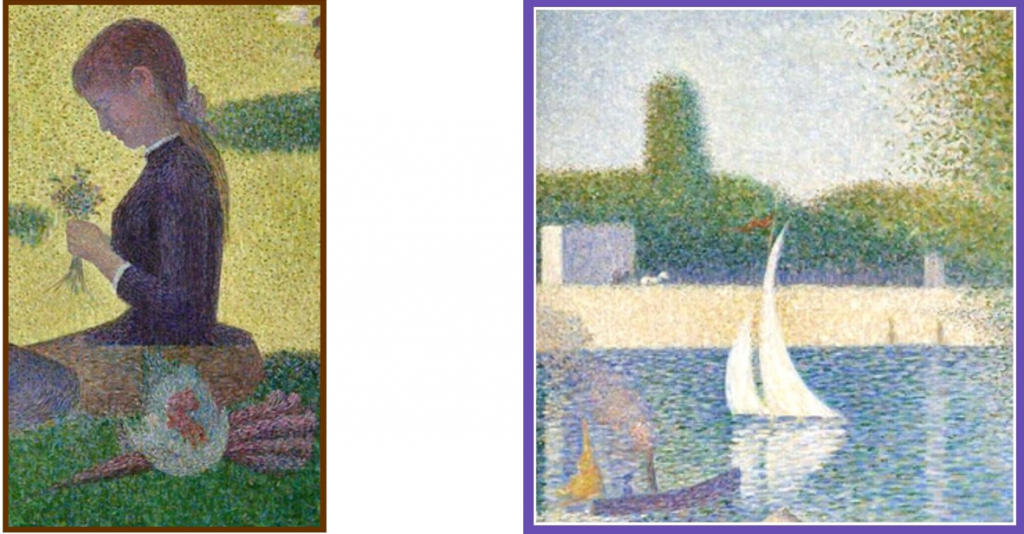 are but pieces of a vast canvas, this one painted by the master of dots, Seurat. 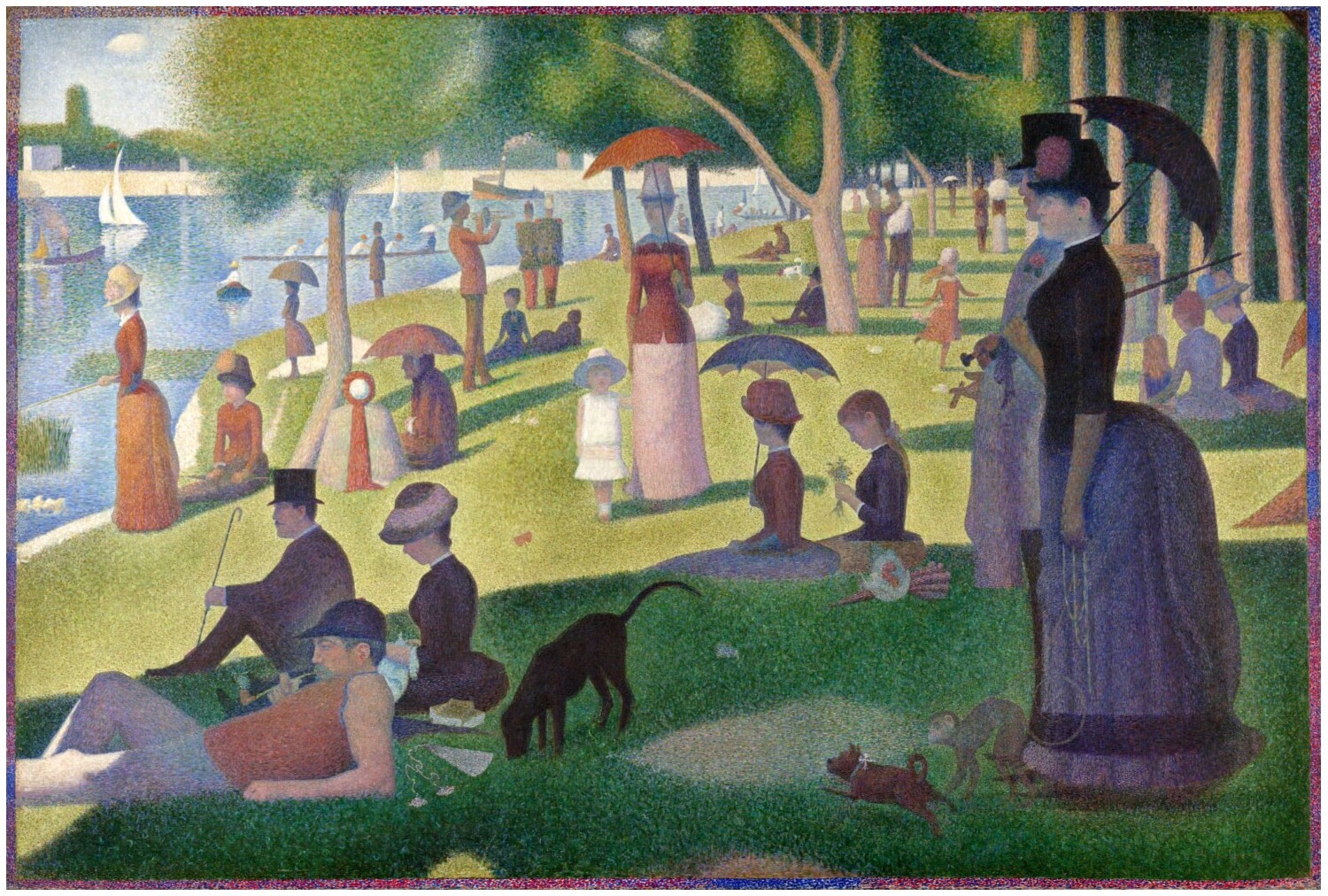 Escape from the box

When it comes to understanding how their world works or why it matters, most Westerners seem to be living in a small box under the stairs.  (Hey, there’s HDTV and Facebook – what could be better?)  Their MSM tells them what they “need to know”.

Nobody knew there’d be a pandemic or an epidemic of this proportion. Nobody had ever seen anything like this before. ~  President Trump, March 19, 2020

“Nobody really knows.  We’re all flying blind here.  This is something really different than we’ve ever seen…  ~ Louise Sheiner, Brookings Institution, March 25, 2020

“I don’t think anyone ever imagined that we’d see a replication of the Spanish flu.” ~ Tom Ridge, Former Homeland Security Secretary, co-chairman of the Bipartisan Commission on Biodefense | Beyond the Blueprint, September 24, 2020

Throughout 2020, free and independent non-Western nations have helped their own people and each other, provided medical and economic aid, built their overall capacity to provide for themselves and others, and sent volunteers and supplies as well as messages of encouragement and collegiality to all – even to those sabotaging, attacking, blockading, sanctioning and denigrating their nations’ peoples and their heroic efforts whether past or present.

Conversely, the Exceptional Western NationTM  and its Western Cohort used the convenient “coincidental” cover of corona chaos to step up bombing, bombing;  sanctioning,  sanctioning, sanctioning; stealing, looting, invading, threatening, hijacking and other war crimes – Rinse & Repeat – again – all while their people became infected and died at some of the highest rates in the world.

With a combined 7.1% of global population, the US, UK, France, Germany and Israel together exceptionally claimed 30.7% of global deaths as of October 4, 2020 – down from 52% on May 3rd. [Daily tracking April – Oct here] In April, two in every three US COVID-19 patients survived. Of course, that meant one in three died.

Since then, most Western mortality rates have fallen below 5%, except for France (24%), Belgium (31%) and Italy (11%).  The UK started out with 96.6% of cases ending in death and ceased reporting recovered cases (April 11) as did Sweden, the Netherlands and Spain.  But, all four are similar now to the US.  Failure of imagination?

China, starting from scratch, worked seriously, locked in a mortality rate in the 5% range, recovered and got on with their lives.  Cuba (1.9%), Iran (6.8%), and Venezuela (.9%) have taken care of their people despite the West’s sanctions, stolen supplies, blockade, sanctions, sanctions and threats.  Despite a color revolution courtesy the West, China’s Hong Kong SAR rate is 2.0%.  Are these just lucky coincidences?

Nobody in our government at least, and I don’t think the prior government, could envisage flying air planes into buildings…  ~ George W Bush, 2004

Except for this and this. And this.

In dealing with this crisis, there were deficiencies in both the local public health response and the federal government’s ability to manage it….the extent of coordination needed among responders… the necessary agreements in place….communication among response agencies was generally effective, but they ran into trouble reaching clinicians to….the number of entities…. The federal government was similarly challenged…to meet demands from local and state officials as well as coordinate the federal response….in handling the voluminous amount of information…communicating with public health officials, the media and the public….the shortcomings in clinical tools available…—such as vaccines and drugs—and the lack [of] training for clinicians….  ~  Harvard, “The Project BioShield Act of 2004: An Innovative Failure,” May, 2006

History never repeats itself, but it does rhyme.  ~ attributed to Mark Twain

When the US reported its first COVID-19 case on January 21 and Trump responded from Davos, “We have it totally under control,” the Strategic National Stockpile had not been replenished under Obama after 2009’s H1N1 episode.  Much of its stock was expired; its longtime director was retiring in a week without permanent replacement.  The experienced director in charge of global health security, biothreats, and US pandemic response left abruptly in May 2018, under a rearrangment which included resorbing the pandemic response team into other agencies and abolishing its top position.  (Bolton was in charge.)

In the EU, the billions-funded Innovative Medicines Initiative, a “public-private partnership” reaped big profits for big pharma but invested nothing in pandemic preparedness.  In the UK, healthcare funding was cut by nearly a quarter between 2015 and 2020.  Why?  Failures of imagination?  Sheer incompetence?  Can Western governments just not get their act together? Nuclear-armed Keystone Cops?  Inept?  Unprepared?  “Plandemic”?  Hoax?  Theft of civil liberties?  Skewed statistics?  Martial law?

It’s infuriating, and anger makes us think funny. But, do “failure of imagination,”  “incompetent” or “inept” reconcile with a group who’ve appropriated 41.6% of the world’s wealth, dominated the entire globe for 600 years, addicted 1 in every 2 people on the globe to a smart[sic]phone, and commandeered 60% of the worlds seeds (food supply) under the control of four of their corporations?  Are 2001 and 2020 separate events, unrelated other than through “failures of imagination” and feigned stupidity?  Did 2020 events spring from whole cloth at the end of December, 2019 – and in China, to boot, our loudly denounced, highly maligned “adversary”?

Watching China’s huge population go into war mode against the virus as against an attack – the people first, all-for-one-and-one-for-all spirit – was awe-inspiring, and something I’ve not felt in the West for decades.   Daily reading their research and ongoing real-time updates (here, then here) on symptoms, transmission, genomes, characteristics and treatments during three months before most people in the US had any idea what was coming soon to a neighborhood near them, I could see how seriously China was taking this threat.  And, I suspected I knew why.

Read the rest of the article: