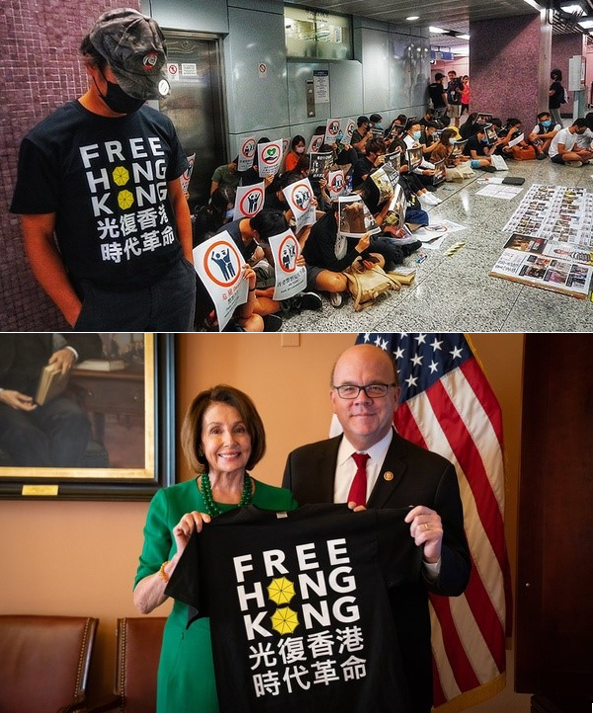 Pictured above: Nancy Pelosi in Hong Kong trying to help overthrow the Chinese government. It didn’t work there and it will work in Taiwan.

House Speaker Nancy Pelosi is planning to travel to Taiwan, an island regarded by Beijing as an inalienable part of the People’s Republic of China (PRC), as a leg of a broader Asia trip. Even though Pelosi has yet to confirm the visit, tensions have escalated sharply between the US and the PRC.
“Remember what happened in 1983? Two days after 241 Marines were blown up in Lebanon, the USA invaded tiny Grenada. Overnight, the previous headlines disappeared. I think we are seeing the same today. NATO is losing badly in Ukraine and it’s going to be a long winter for the West. Pounding its imperial chest with Taiwan is now what the MSM is reporting, much less so Ukraine,” suggests Jeff J. Brown, author of “The China Trilogy,” editor at China Rising Radio Sinoland, and curator of the Bioweapon Truth Commission.
If Pelosi travels to Taiwan, this would be the first time a high-ranking US politician visits the place in 25 years. Last time it was Newt Gingrich, then-speaker of the US House of Representatives, who arrived on the island in 1997, ignoring the Chinese leadership’s discontent.
“I said firmly, ‘We want you to understand, we will defend Taiwan. Period,'” Gingrich told the press at the time, as quoted by The New York Times. However, Clinton administration officials made it clear that Gingrich “was speaking for himself.”
Likewise, it appears that Pelosi’s apparent visit to Taiwan is not in line with the Biden administration’s China policy, argues Francesco Sisci, a Beijing-based China expert, author, and columnist.

“American politics is not set like an omniscient Leviathan,” the China expert says. “The Congress, the Senate, the executive all move according to different agendas which do not often coincide and are in conflict with one another. The issue is that there is a growing anti-Beijing sentiment in America and this has sometimes bursts which aren’t fully sorted out. I believe the visit is an expression of a sentiment, rather than of a clear cut plan.”

According to CNN, Pelosi’s initiative has triggered concerns both in the Biden administration and the Pentagon, with US national security officials “quietly working to convince House Speaker Nancy Pelosi of the risks of her potential trip to Taiwan.” While in 1997 Beijing and Washington managed to solve the dilemma, this time the PRC leadership might opt for a harsher response, CNN and The Guardian have warned.
Washington has been fanning US-Sino tensions for quite a while, starting with Donald Trump’s tariff war against Beijing, which has yet to be halted by Joe Biden. In a candid phone conversation, Chinese President Xi Jinping warned his American counterpart against “playing with fire” over Taiwan and explained that any involvement would ultimately backfire on the US.

“A Chinese general has publicly declared that Pelosi’s visit could entail a military response from Beijing,” Brown says. “China’s Ministry of Foreign Affairs has repeated this. Now, with Xi’s ‘You get burned playing with fire’ metaphor, I think there would be a military response.”

Senior Colonel Tan Kefei, a spokesperson for China’s Ministry of Defense, stated on July 26: “If the US insists on taking its own course, the Chinese military will never sit idly by, and it will definitely take strong actions to thwart any external force’s interference.”
Tan highlighted that Pelosi’s visit to Taiwan would “seriously violate the one-China principle” and “seriously harm China’s sovereignty and territorial integrity, and seriously damage the political foundation of China-US relations.”
Meanwhile, Brown surmises that China’s hypothetical response “might include a declared no-fly zone.” However, there is a “much more elegant option,” according to the author:
“[China could] take over Taiwan’s Kinmen Island, which is only two kilometers from Xiamen, off China’s Fujian Province coast. It would take only a few hours. I do not think Beijing will strike any US targets, unless attacked first.”
The scholar also does not rule out that the Democratic People’s Republic of Korea’s (DPRK) remark, made earlier this week, that Pyongyang is “fully prepared” for any military conflict with the United States is no coincidence.

“Does Biden know that China and nuclear-armed North Korea have had a mutual defense treaty since 1961?” Brown asks rhetorically. “NATO is being bled dry in Ukraine and it is imperial folly, hubris or geopolitical brinkmanship to think it can fight East Asia’s biggest and most powerful military, which is only 200 km from Taiwan.”

For his part, Sisci believes that the PRC could opt for an asymmetrical non-military response. Still, the unfolding crisis is complicated by the fact that Washington is already involved in a confrontation with Russia, raising questions as to whether the US is capable of taking on Moscow and Beijing at once.
“I don’t think that either China or the US wants an escalation,” says Sisci. “The talk between Biden and Xi Jinping was to avoid an escalation.”
Brown also believes that Beijing’s warnings have been heard by Washington.

“Pelosi’s visit to Taiwan has been bandied about by Washington for months now,” he says. “A supposed Covid-19 infection scuttled the first trial balloon. After Biden’s phone call yesterday with Xi, I suspect another American ‘postponement’ is likely to occur. If not, then ‘Katy, bar the door!'”