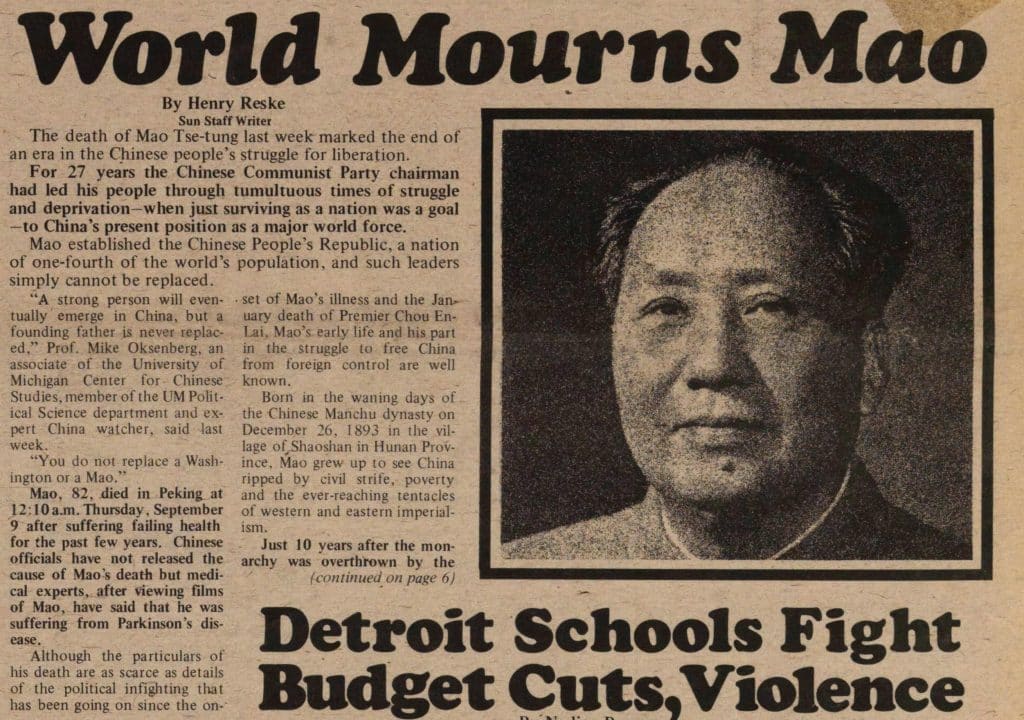 Pictured above: Mao Zedong’s death not only shook China, it shook the whole world, since he was 20th century’s most influential world leader. I didn’t say the best, since that is very much an opinion, although 98% of the Chinese would say so. But the most influential, the most important in the 1900s, in terms of world history? Case closed. Mao wins hands down.

To add insult to injury, right before Mao’s death came the calamitous Tangshan earthquake (http://www.disasterhistory.org/tangshan-earthquake-1976), which killed hundreds of thousands. The Chinese people were in a state of shock and it really did seem like the signs were there that the Heavenly Mandate was falling apart.

But it didn’t turn out that way. As explained in factual detail in my last two books, China Rising – Capitalist Roads and Socialist Destinations (https://ganxy.com/i/113798/jeff-j-brown/china-rising-capitalist-roads-socialist-destinations) and China Is Communist, Dammit! Dawn of the Red Dynasty (https://www.amazon.com/China-Communist-Dammit-Dawn-Dynasty/dp/6027354380/), Deng Xiaoping’s economic and opening up reforms, starting in 1978, were actually a continuation of what Mao had already started, and could never have succeeded without the total transformation of New China, thanks to the great leadership of the deceased Chairman (http://chinarising.puntopress.com/2017/08/26/today-is-deng-xiaopings-birthday-china-rising-radio-sinoland-170822/).

In national poll after poll, Mao Zedong, forty years after his death, continues to be an iconic rock star in the eyes of the Chinese people (https://dissidentvoice.org/2013/12/mao-remains-popular-in-china/) and (http://www.globaltimes.cn/content/834000.shtml). Many millions of Chinese go to Mao’s hometown in Shaoshan, Hunan Province (http://www.globaltimes.cn/content/1025847.shtml), to pay their respects to the man who fought for and won their freedom from Western tyranny and imperialism. Many millions more solemnly walk past the sarcophagus in his mausoleum on Tiananmen Square in Beijing (http://www.china.org.cn/bjzt/2012-12/31/content_27438734.htm).

Obviously, they know something about the man that Euranglolanders (all the NATO countries, plus Australia and New Zealand) cannot see, or refuse to do so, thanks to 100 years of hysterical, foaming-at-the-mouth anticommunist propaganda, behind the Great Western Firewall (https://1917.rt.com/). In Eurangloland, Mao is portrayed as a dehumanized monster, with mossy fangs and blood dripping from his mouth and clawed hands, a vampire and real-life Hannibal Lecter (http://www.medicalbag.com/despicable-doctors/the-real-life-hannibal-lecter-was-a-scary-dude-too/article/472809/), who feasted on the flesh of his poor, helpless people. It’s sad really, to realize that the CIA Big Lie mass media propaganda steam roller is so devastatingly effective in brainwashing most of the world’s people.

It’s the same thing in Russia. For the third year in a row, Joseph Stalin was polled in-country as the best leader in the country’s history (http://worldglobal.news/2017/06/27/stalin-is-still-more-popular-than-putin-with-russians/) and the Western talking heads just can’t figure out why (http://www.independent.co.uk/news/world/europe/the-big-question-why-is-stalin-still-popular-in-russia-despite-the-brutality-of-his-regime-827654.html). Well good golly Miss Molly, maybe Stalin wasn’t the Mao-like monster cartoon caricature that the same, psychopathic, mentally deranged Western media makes him out to be. Stalin is even more popular than Russia’s current President Vladimir Putin, who consistently has approval ratings Western leaders can only dream about (http://www.politico.com/story/2017/08/16/poll-republicans-putin-russia-confidence-241701).

After all, it’s the Chinese who grew up and spent their lives under the governance of Mao Zedong, not Westerners. It’s not the clueless citizens of Eurangloland who lived with Stalin. It is Russians, who can honestly reflect back on what their former leader means to them, past, present and future.

Do yourself a favor and at least balance a lifetime of, I’m sorry to say, vomit projectile Eurangloland schooling and propaganda that twisted my views of the world for too much of my life. Don’t wait until you are sixty years old, like me, to finally pierce the Western veil and step outside the Matrix (http://chinarising.puntopress.com/2017/06/03/tall-tiananmen-tales-and-the-little-red-pill-a-china-rising-radio-sinoland-classic-for-this-june-4th/) into the white light of reality and reason.

The orchestrated Eurangloland propaganda reminds me of The Exorcist (https://www.rottentomatoes.com/m/exorcist/). I think I finally figured out all the allegories. Linda Blair’s character Regan MacNeil symbolizes Western mainstream media. The exorcist, Father Merrin, played by Max Von Sydow, embodies all the communist and socialist countries around the world. The poor priest (Jason Miller as Father Karras), who gets hit with the green projectile vomit, plays the part of the all the brainwashed citizens behind the Great Western Firewall. See what I mean,

To coin a Russian metaphor, Westerners truly live in a mythical Potemkin (https://en.wikipedia.org/wiki/Potemkin_village) fake news unreality. Thank you, Donald Trump for calling bullshit on the West’s fake news propaganda (http://www.politico.com/story/2017/06/28/donald-trump-twitter-media-fake-news-240036). But it’s not just Democrats and “liberals”, whatever the hell that is supposed to mean in America these days. The Big Lie fake news runs across the entire political spectrum, because it is all orchestrated and coordinated by the CIA-MI6-military complex (http://www.whatreallyhappened.com/RANCHO/POLITICS/MOCK/mockingbird.php#axzz4sNAYOyfM). As Mr. Trump attests, Operation Mockingbird never went away (http://thefreethoughtproject.com/fbi-impersonate-media-mockingbird/). It has metastasized and killed the body politic.

While Chinese and Russians venerate their past leaders, and if you know the real story, for very concrete reasons, Americans are cannibalizing their own. As they should. George Carlin expressed very well who Uncle Sam’s founding fathers really were and what they created,

Another brilliant satirist, John Rachel (http://jdrachel.com/), is trying to change America’s way of doing business, from its well established evil past and present, with his Peace Dividend (https://www.youtube.com/watch?v=PbIfN5jTMVE).

Don’t die a brain dead, mainstream media zombie. After signing up at the top of this webpage, to receive the free China Rising Bulletin, you can show your contempt for the West’s owners, by putting your social media to good use and posting this page and its main website. Then, spice up your work lunch or water cooler break with a copy of this article to pass around. Who knows, maybe you can help save the West from itself, before it’s too late. Sharing is caring. No one can say you didn’t try!