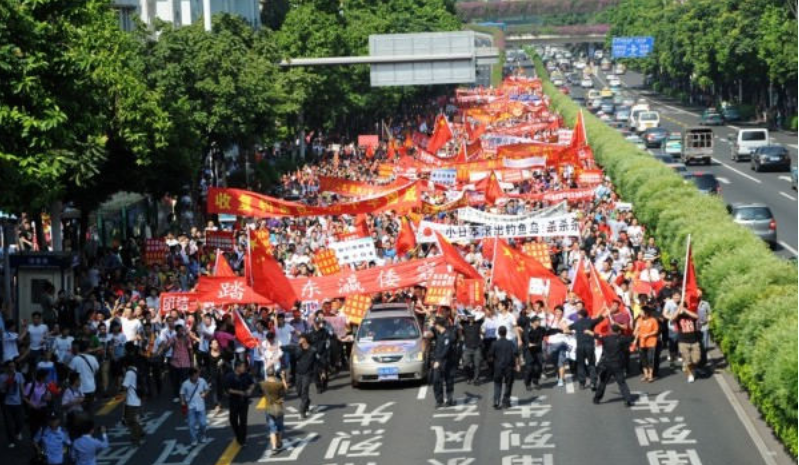 Pictured above: Chinese street protest against Japan, in 2012, for “buying” islands in the Diaoyu Archipelago. No public protests yet against Trump and Company. Stay tuned.


Thousands of dollars are needed every year to pay for sophisticated anti-hacking systems, controls and monitoring. This website has to defend itself from tens of expert hack attacks every day! It’s never ending. So, please help keep the truth from being censored and contribute to the cause.


On May 4th, 1919 China changed forever and as a result, so did the world, all geopolitics and world economics thereafter. I wrote about this last month, to commemorate its one-hundredth anniversary and explain why it was and still is so earth shaking (https://chinarising.puntopress.com/2019/05/05/may-4-1919-is-the-day-the-world-changed-forever-and-the-chinese-will-never-forget-china-rising-radio-sinoland-190504/).

Trump missed it by eleven days, but he might as well have banned Huawei from doing any business in the US on May 4th, 2019, to doubly make the insult. This was just after he raised duties on almost all Chinese exports to 25%. I live with the Chinese people and talk to them every day. In all my 16 years here, I have never seen such a sense of indignation and anger at the West, just like a century ago, especially against the US president and the country he represents. Social media, with hundreds of millions of participants, as well as the national media are abuzz with calls to action.

I predict that May 15th, 2019 will be known as China’s 21st century version of the May 4th Movement a hundred years ago. But now, it’s not just young people who are fit to be tied. It’s Baba Beijing, citizens of all ages and walks of life who have (again) given up on the West as having anything credible to offer them. In 1919, it was notions of “pluralistic democracy”, which didn’t last long, as Mao Zedong and Company realized that communism and socialism were the only solution to everything that was ailing their country, including the West raping and having plundered the people and keeping them addicted to opium, morphine and later, heroin, since 1839. That all ended in 1949.

Today, all hopes for the Chinese people to be included as equals in the postwar, Bretton Wood-WTO world order have been smashed on the rocks of realpolitik reality: global capitalism cannot compete fairly against any country that is communist-socialist-anti-imperialist, including China as the world’s biggest economy, so the West has to resort to doing everything possible to destroy them. Look no further than China, Russia, Serbia, Iran, Venezuela, Cuba, North Korea, Syria, Iraq, Afghanistan, Libya and on and on.

Mao was a genius at using fiery rhetoric to attack the colonial West and keep his people informed, but that kind of geopolitical diplomacy is not usual for Baba Beijing, which for 5,000 years prefers dealing with other countries elliptically and asymmetrically, rarely mentioning leaders’ names, nor singling out countries. Yet, to give you an idea about how the government has also lost all hope for cooperating with the West, media headlines now shout the US’s “economic terrorism”, calling bullshit on Trump and Pompeo (https://chinarising.puntopress.com/2019/04/24/mike-pompeo-says-lying-cheating-and-stealing-reminds-you-of-the-glory-of-the-american-experiment-china-rising-radio-sinoland-190424/), issuing travel and study warnings to citizens considering going to the United States, just releasing a white paper that scathingly excoriates the US and its gangster behavior, and by the end of this month, will release a black list of foreign companies that are working against the Chinese people’s interests. We have not seen this kind of inflamed rhetoric and words being put into concrete anti-imperial action, since Mao mocked the West for being a paper tiger, while confidently developing atomic weapons.

In the national press, there have even been calls for China to ban exports of rare earth metals to the US. China possesses the biggest known supplies and dominates the global market. A year ago, the headlines were saying China would never lower itself to the level of the West. Not anymore. Time to get ugly. Since many rare earth metals are used in mobile phones, computers and electronics, the answer goes, what’s bad for Huawei could be even worse for Uncle Sam. Contingency plans are already in place. This was not Baba Beijing’s ideas, but prompted by citizens on social media and contacting government portals directly, to implement the ban.

In the national press, Xi Jinping has evoked the heroic 1930s Long March, led by Mao Zedong, which saved the Communist Party of China and the People’s Liberation Army. He is telling his people to prepare themselves for hard struggle and sacrifice, in the face of the West’s onslaught. He has also used as role models famous soldiers and revolutionaries who sacrificed everything for communist liberation and the people’s freedom from Western tyranny.

A Western journalist friend contacted me and said he didn’t think Baba Beijing would go so far as to ban rare earth metal exports to the US. It just goes to show you how out of touch foreigners are about China’s very participatory and proactive democracy, that I hear stuff like that. The Chinese people are royally livid at the West, particularly Trump and the US. Xi Jinping and the rest of the leadership, as real representatives of their people’s voices, must take into consideration their rancor, sense of justice and feelings of being insulted.

Black lists, travel warnings, increased heat on all the thousands of illegal Westerners working in China on improper or expired visas, extra-thorough audits on foreign companies, rare earth metal bans, calling for boycotts of Western goods, increased presence in the South China Sea, greater pressure on Taiwan, sending home NGOs suspected of working for the CIA, openly arresting Westerners engaged in espionage; scrutinizing imports, specifications and bills of lading from the US; giving all the help China’s high-tech companies need to weather the storm, like Huawei and ZTE, along with the other 150 on Trump’s shit list – there are many tactics and strategies Baba Beijing can use against the West. Just this week, Shanghai sent back 7,000mt of garbage that had been illegally shipped from various Western countries.

The one thing I don’t think they will do is start dumping the $1 trillion in US debt that China owns, as that would likely cause a global meltdown, by threatening the reserve status of the dollar. That day may eventually come, in 10-20 years, when China is first among equals in a multipolar world, unless Western economies don’t crash on their own beforehand, which is very possible.

Venezuelans are proving that if a nation is unified against any and all aggression from a much more powerful adversary, it can persevere and eventually win. The same thing happened during the Korean and Vietnam Wars, in Russia, Iran, Cuba, Nicaragua, Bolivia, Eritrea and everywhere else communism-socialism has successfully beaten capitalism, in order to gain the people’s freedom and democracy. It’s a never-ending titanic battle, as have seen in Ecuador, Argentina and Brazil being reduced (again) to the status of colonial whores.

China, with 5,000 years of civilizational unity, only got bested for 110 years, during the West’s imposition of the century of humiliation, 1839-1949. With the Huawei ban, Trump and Company have unified China’s people like never before, just like what the West’s lies and treachery did 100 years ago.