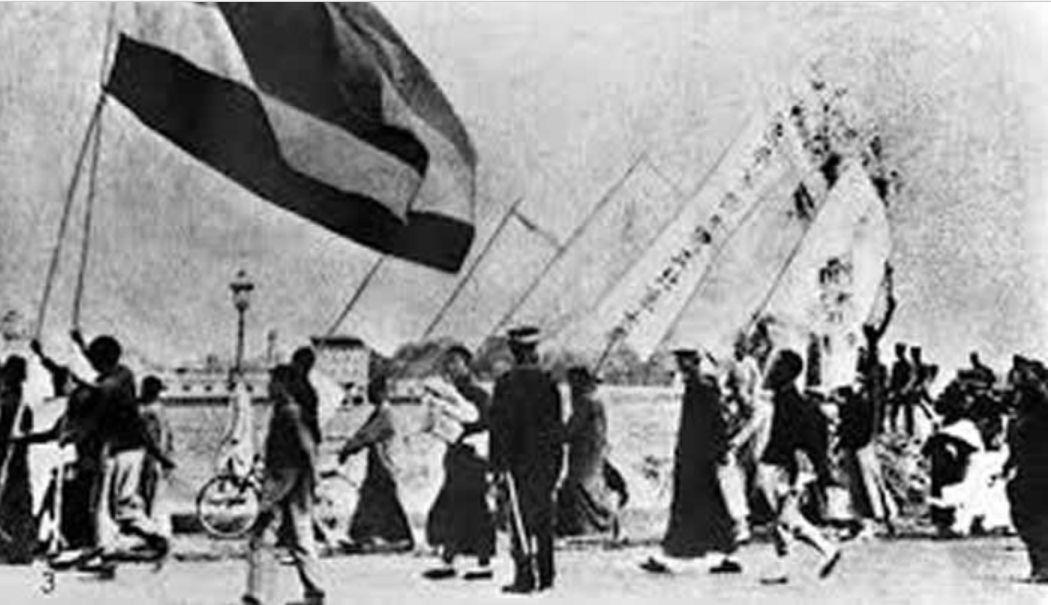 Pictured above: the May 4th uprising in China started in Beijing, with 3,000 angry students marching on the streets. They helped fan the flames of revulsion against Western imperialism destroying their people with drug cartel opium, while raping and pillaging their national resources. Within days, tens of cities around the country were filling the streets and began demanding Marxist socialism and the dream of communism for their future. It took thirty-five million martyrs over the world’s longest civil war and they were finally victorious in liberation from colonialism in a Free China, on October 1, 1949. Humanity has never been the same since.


I have written much about China’s gripping, gritty, heroic and valiant struggle during the first half of the 20th century, to kick out imperial Japan; drug dealing Western colonialists and their armies, and fascist Chinese nationalists – all hellbent on destroying Mao Zedong and the Communist Party of China (CPC), after its founding in 1921. Check out The China Trilogy below and I invite you read it. The background, events and people involved, on all sides, are infinitely fascinating and inspiring.

Starting in the early 1900s, Chinese intellectuals began to call for completely rejecting “old China” and traditional Chinese philosophy, which were branded as the source of all the country’s hapless efforts to kick out Western and Japanese imperialists, and regain their independence. The New Youth Movement called for beating the West at their own game, fully adopting Occidental governance, teaching, research, development and culture. This radical platform shows just how frustrated were China’s intellectuals and youth about one-fourth of their people being kept addicted to drugs by the West, and the ease with which these foreigners could rape and plunder the citizens and their natural resources with impunity. Others, like Mao Zedong (for a time at least) felt that a middle road was preferable, keeping what was good about Confucism, while filling in the gaps with Western culture.

In the interim, the 1917 Communist Revolution in Russia freed that country from its previous capitalist owners, and many Chinese, like Deng Xiaoping, Zhou Enlai and Zhu De were in Europe studying Marxism. This was the solution that many Chinese patriots were looking for. Marxism was Western, but thoroughly anti-capitalist and anti-imperialist. The founders of the CPC, including Mao Zedong, fully moved to this national goal, rejecting China’s failed republican, Western style democracy.

During World War I, 180,000 Chinese went to France to work in the China Labor Corps (CLC) to support the Allies against Germany. I traveled to that area to visit the largest CLC cemetery in Europe, interviewed the town historian and was given valuable access to many historical documents. All of this is explained in wonderful detail in Book #3 of The China Trilogy, China Is Communist Dammit. The quid pro quo for the Chinese was France’s, Britain’s and the US’s promise that after the war, they would return the huge province of Shandong (symbolically too, the birthplace of Confucius), a German colony, back to the Chinese people. But to appease imperial Japan, these allies signed a secret agreement with the Japanese, promising to give Shandong to them. The Chinese delegation found this out in Versailles, during the postwar negotiations, much to their humiliation and shame. The Chinese representatives were treated with contemptuous disdain, like “yellow niggers”. Completely betrayed by racist Western imperialists, they returned to China to make the announcement.

It was like an earthquake across the land. When the news hit the Chinese media about the West’s treachery and blatant racism, all hell broke loose and its first manifestation was the May 4th Uprising in Beijing. Whatever regard the Chinese had previously given to the West, as a model to emulate, it evaporated overnight, and in its place was contemptuous disdain for White racism and capitalism.

This year marks the 100th anniversary of that fateful day. A century later, it looms huge in the minds of the Chinese people and is fully taught in national school curricula. In honor of all the students who lit the spark in 1919, May 4th has been coronated National Youth Day. This week, Baba Beijing has been in full swing to commemorate this beginning movement towards China’s eventual communist liberation. On April 30th, President Xi Jinping invited a large crowd of young people to the Great Hall of the People to give them a rousing speech of inspiration. (https://enapp.chinadaily.com.cn/a/201905/02/AP5cc9f561a3104dbcdfaa7d6e.html). In it he told them,

The essence of patriotism is having unified love for the country, the Party and socialism, Xi added, urging young Chinese to follow the instructions and guidance of the Party, and remain dedicated to the country and the people.

Young people are also urged to establish belief in Marxism, faith in socialism with Chinese characteristics, as well as confidence in the Chinese Dream of national rejuvenation…

In the new era, the theme and direction of Chinese youth movement and the mission of Chinese young people, Xi said, are to uphold the leadership of the CPC, and work along with the people to realize the two centenary goals and the Chinese Dream of national rejuvenation. 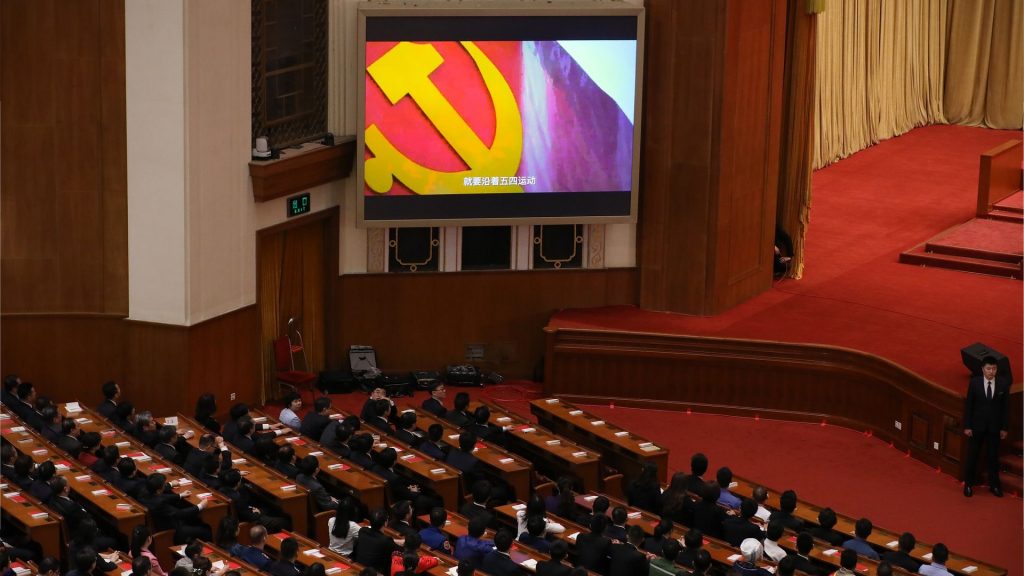 Above: Chinese youth in the Great Hall of the People watching a presentation on the May 4th Uprising, which evolved into a full blown national movement. 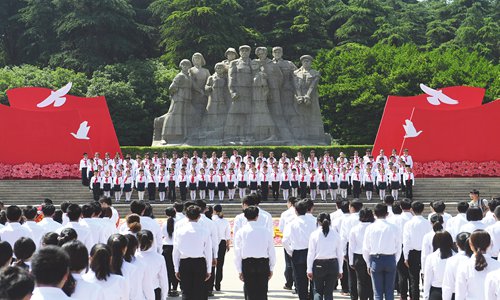 Above: Chinese youth at a May 4th Uprising ceremony in Nanjing.

A historical retrospective is being shown at the New Culture Movement Memorial (a.k.a. the Red School) in Beijing, a hotbed of early communist activity, where a youthful Mao Zedong worked at one time (https://enapp.chinadaily.com.cn/a/201904/30/AP5cc78c81a3104dbcdfaa7adf.html). I visited there to help write The China Trilogy and am sorry I’m going to miss this special centenary exhibition.

Meanwhile, the West is still in denial about its sordid, criminal 110 years of rape, plunder and drug cartel dealing in China, 1839-1949. Guilty as charged, by the Chinese people. Eurangloland has never been able to accept that China is communist-socialist (https://www.nytimes.com/2019/04/29/world/asia/china-xi-jinping-speech-may-4-protest.html and https://www.nytimes.com/2019/05/03/world/asia/china-may-4-movement.html).

4 thoughts on “May 4, 1919 is the day the world changed forever and the Chinese will never forget. China Rising Radio Sinoland 190504”