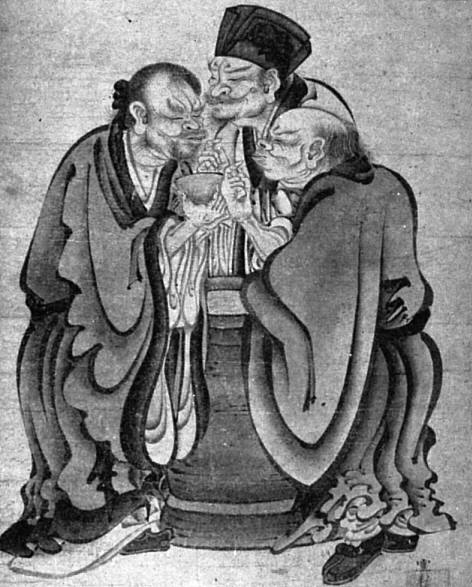 Pictured above: left to right, a depiction of the famous allegorical story of Confucius, Laozi and Buddha each tasting vinegar in a vat, and the interpretation of their results. Today’s Hong Kong could be represented by the vinegar. Now, all three are in mind and spirit, watching over China’s wayward territory.


There is a great allegorical story about Confucius, Laozi – who was the founder of Daoism – and Buddha gathering around a vat of vinegar to taste it. Confucius and Laozi actually met and spent some time together in the 6th-5th century BC. Buddhism did not make it to China until the 1st century AD, but other than the latter’s concept of reincarnation, the three philosophies have much in common and all are looming large over the problems happening in Hong Kong recently.

In the story, Confucius thought the vinegar tasted sour, symbolizing that people needed a system of values and an understanding about how society and government needed to be guided. Buddha tasted bitterness, representing the toils and troubles during our existence on Earth: greed, vainglory, anger, and the only way to overcome them is to clear our minds and souls of all selfishness, in order to attain inner peace and enlightenment. And then there was Laozi, the original hippie, uber-Mr. Natural, who thought the vinegar tasted just grand, because that is that way it is supposed to taste, so why fight it or criticize its essential being? Just take a step back and let life flow, baby. Groovy, dude… (https://en.wikipedia.org/wiki/Vinegar_tasters).

Since there are many common threads in all three philosophies, over the centuries they have melded into a popular Chinese belief system under the rubric of “Buddhism”, but all three are very much part and parcel of what transpires in thousands of temples across China, when citizens go there to pray, meditate and make offerings. These commonalities center around humility, forbearance, relenting and retreating in the face of insults, violence and arrogance. I have written about this way of life (https://chinarising.puntopress.com/2017/11/10/all-the-chinese-people-want-is-respect-aretha-franklin-diplomacy-on-china-rising-radio-sinoland-171110/) and how it has helped me enjoy a fuller, more meaningful life (https://chinarising.puntopress.com/2018/11/26/eulogy-for-my-mother-with-thoughts-on-our-life-together-and-reflections-on-human-existence-181120/). It can be generally encapsulated under the Chinese concept of ren (忍), which means to relent in the face of aggression or arrogance.

And we are seeing this way of life unfolding before our eyes, during all the protests and violence happening recently in Hong Kong. Before we get to ancient Chinese philosophy NOT kicking butt there, you first have to understand that the West, via their spy agencies (CIA, MI6, DGSE, BND, etc.) and cover NGOs among the 37,000 present there (https://www.greanvillepost.com/2019/07/02/hong-kongs-poisoned-chalice/), which are also funded by the likes of the National Endowment for Democracy (NED), pseudo-liberal billionaires like George Soros (https://needtoknow.news/2017/04/list-206-organizations-funded-george-soros-operating-us/) and Pierre Omidyar, are organizing and paying for all this ongoing mayhem. I wrote about this during the last imperial attack on Hong Kong, called the Umbrella Revolution (http://chinarising.puntopress.com/2017/08/26/baba-beijing-is-sick-and-tired-of-the-west-using-hong-kong-to-overthrow-the-cpc-china-rising-radio-sinoland-170821-2/). Like then, the West is paying thousands of unemployed people 20-30 euros a day to hit the streets and create havoc. Sensing weakness on the part of the Chinese, due to their adopting ancient Chinese ren, there are reports that the CIA cabal is now paying top dollar to try to destroy Hong Kong’s way of life, up to 5,000 Hong Kong dollars a day (about US$650) for those willing to wantonly destroy property and attack the police.

Sometimes they get caught in the act. Below is a photo of an obvious Western spook directing Hong Kong protestors. This clown’s t-shirt says “Freedom (is) freedom, pussy” or “Freedom, freedom hello”, depending on whether you use Cantonese slang and for social media in China, the big yellow characters paraphrase, “Be on the lookout for these evil devils”. I have been informed by locals that his name is Brian Kern and he is a well-known CIA/color revolution operative in Hong Kong. All in a day’s imperial chaos and mayhem, 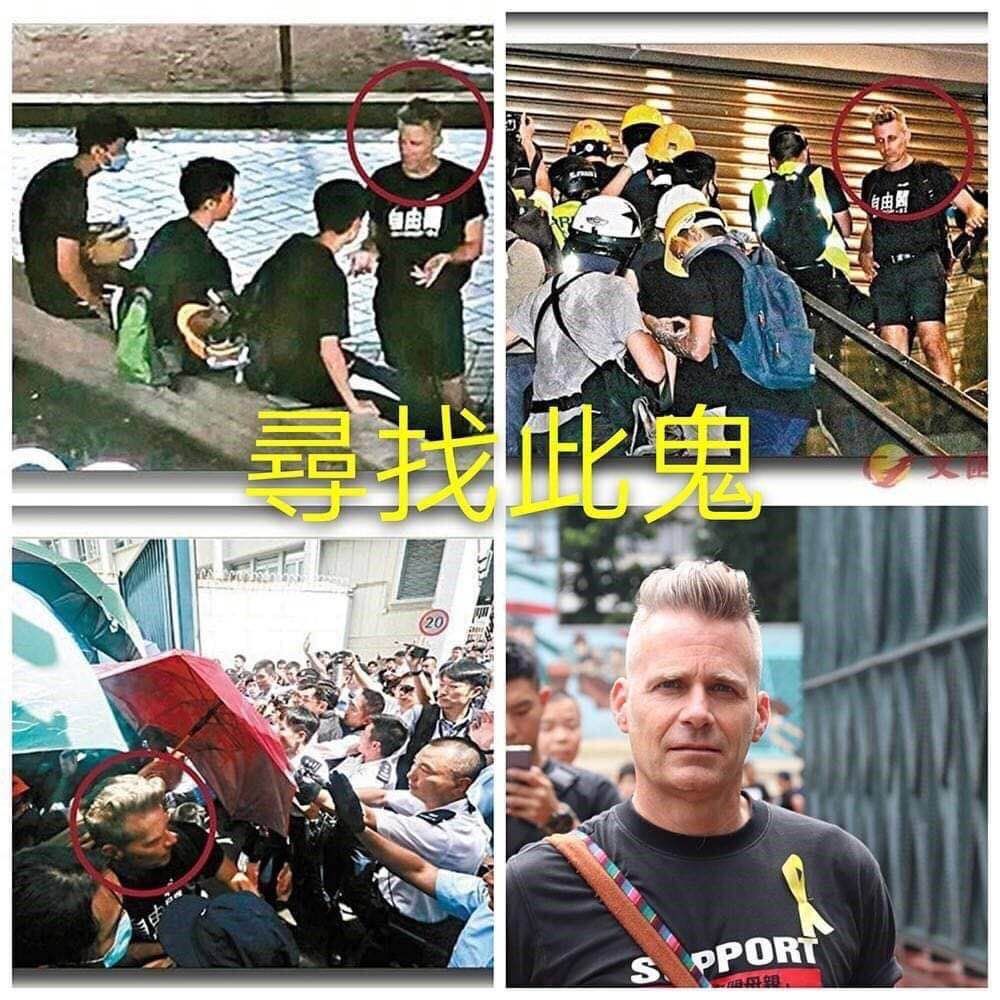 Photos like the one below were also taken during the Western paid-for Maidan color revolution in Ukraine in 2014, 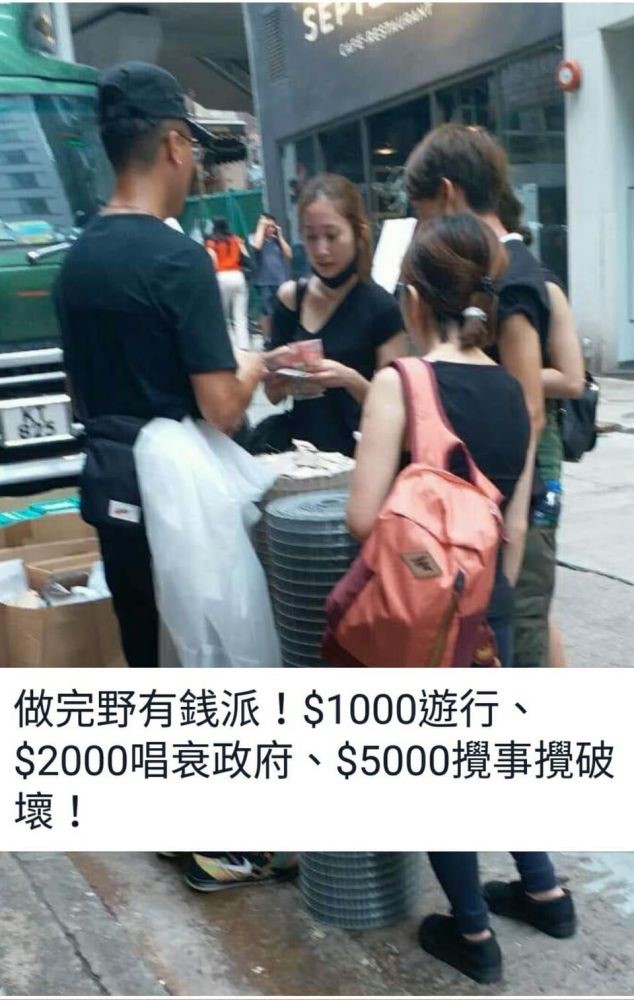 The Chinese social media text above says that these people were being paid HK$1,000 to march for a day, HK$2,000 for chanting against the government and HK$5,000 for tearing the place up.

All this kind of blatant evidence is widely circulated across Chinese social media, so everybody except Westerners knows exactly what is going on. Baba Beijing is publicly calling for investigations into “foreign meddling” of the very violent Hong Kong protests turned riots (https://www.scmp.com/news/hong-kong/politics/article/3016699/independent-inquiry-clashes-during-hong-kong-extradition). Again, it’s not rocket science, except for clueless, brainwashed Euranglolanders.

Given the obvious, I was at first frustrated that Hong Kong authorities, clearly with China’s nod, retreated from passing the extradition law that would allow Taiwan, Hong Kong, Macau and the Mainland to send wanted crooks to the origins of their crimes. Even after living and working with Chinese people for 16 years and fully understanding and adopting their practice of ren, as a Westerner, it’s normal to genuflect, screaming, an eye for an eye, a tooth for a tooth, so shove that law down those foreign manipulated punks’ throats! That’s how we think and react and at first, I was thinking Hong Kong’s leaders were looking like muddle-headed fools.

But, Confucius, Laozi and Buddha were on all the leaders’ minds. Incredibly, at least from a Western point of view, Hong Kong’s governor, Ms. Carrie Lam, on behalf of her administration profusely apologized to the whole world for not doing a good job, for not communicating well the extradition bill’s intent, for underestimating the people’s concerns and failing their expectations. For days, they showed the utmost humility and contrition to their citizens. Imagine that happening in the West. Not! Then Lam kept a low profile for a few days, to let the dust settle.

Yet, ancient Chinese philosophy is proving to be victorious in the face of relentless Western attempts to destroy Hong Kong’s, and by extension, Mainland China’s way of life. You could call it Mohammed Ali’s rope-a-dope strategy, or give ‘em enough rope to hang themselves, and that is exactly what has happened. The CIA gang perceived all of the aforementioned ren as a sign of weakness and turned up the violence dial, by ordering the their goons to sack the Legislative Council. They estimate it will take millions to fix and up to six months to reopen its doors. This is the result of Western propaganda’s “peaceful, freedom and democracy loving protestors” (https://www.scmp.com/news/hong-kong/politics/article/3017181/rampaging-protesters-shocking-trail-destruction-hong-kongs).

Below is a montage of short videos to show just how much damage these Western thugs did to the Legco,


As a result, there is now widespread anger and revulsion by the vast majority of Hong Kong citizens against the protestors (https://www.scmp.com/news/hong-kong/politics/article/3017007/widespread-condemnation-protesters-who-stormed-hong-kongs) and Baba Beijing is using it very effectively to remind China’s 1.4 billion citizens what real Western “freedom and democracy” offer: violence and chaos.

The whole fiasco has blown up in the West’s imperial face and all it can do now is double down on the mayhem, because that is all it knows what to do. Colonial capitalists have the brains of reptiles. They run around like Komodo lizards, killing everything in sight, only thinking about ever more money, property, possessions and power, at the expense of everyone else and the survival of Planet Earth. We now have young Hong Kongers supposedly inspired by these animals to commit suicide “for the cause” and the West’s puppet local leaders saying they would rather die than allow the extradition bill to pass (https://www.scmp.com/news/hong-kong/law-and-crime/article/3017330/radical-core-hong-kong-protesters-who-trashed-citys). In the face of a civilization that above all cherishes social harmony and economic stability, the West is committing long term hara-kiri, while again, handing Baba Beijing a massive anti-Western democracy public relations coup, both on the Mainland and in Hong Kong.

It will get to the point where most Hong Kongers will be counting the days when the territory is completely reunited with the Mainland on July 1, 2047, while green with envy, gazing at 40-year-old Shenzhen next door (where I have lived for the last three years), which is already a generation ahead of Hong Kong, all thanks to Confucius, Laozi and Buddha showing the way (https://chinarising.puntopress.com/2019/03/07/60-seconds-over-sinoland-shenzhens-economy-beats-hong-kongs-dont-even-ask-me-about-quality-of-life/).

Governor Lam has since come out offering to talk to the protestors, while refusing to drop the extradition bill, which will eventually pass, mark my word, as well as demanding that all the imperial traitors be identified, arrested and prosecuted. The Hong Kong moral majority also organized a big demonstration in support of the beleaguered police force – which has shown incredible ren – and the government. In the end, global capitalism will have won a pyrrhic propaganda battle, but has already long lost its sabotage war to destroy the Chinese’s communist-socialist way of life.

So, to Confucius, Laozi and Buddha, hear, hear, three cheers!

In closing, here is a funny, acerbic tweet, probably from a Brit living and working in Hong Kong. Not all Westerners are brainwashed fools, 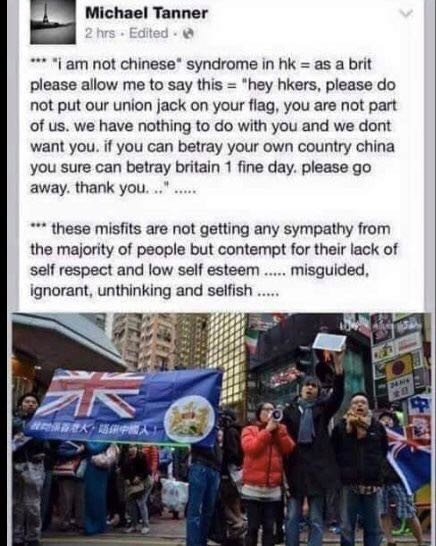