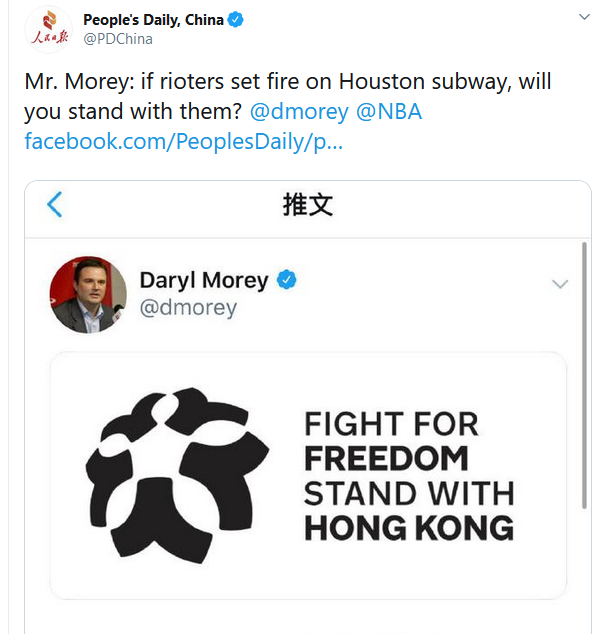 Pictured above: territorial integrity and national sovereignty? Never heard of it. The American Civil War? What was that?

NBA Commissioner Adam Silver’s press conference two days ago in Japan tells you everything you need to know about the West’s racist attitudes towards the rest of Planet Earth’s peoples – and as a result has dug a very, very deep Chinese grave for his organization (https://edition.cnn.com/2019/10/08/media/nba-adam-silver/index.html). He said he will not apologize for Houston Rocket GM Daryl Morey’s tweet, pictured above (which has since been deleted from his account), nor has Morey, who just can’t seem to understand the “unexpected” reaction in China.

Mr Morey: if rioters set fire on (the) Houston subway, will you stand with them?

NBA is big business in China. Every year, it makes about $120,000,000 off the Chinese market. It is already 10% of its global revenue and is projected to be 20% by 2030. Tencent’s contract for digital broadcasting rights alone is $1.5 billion. CCTV, the country’s biggest television station, has stopped broadcasting all NBA games. Exhibition games here are being canceled. Merchandise is being pulled from Taobao, China’s Amazon. Media stars like actor Wu Jinyan and singer Fan Chengcheng have also announced they are boycotting the NBA.

All official Chinese sponsors have dropped the NBA, including,

Unilever’s Clear Haircare has also dropped the NBA in China. Will Under Armour, Adidas and Nike in China stay silent, if they hope to maintain “cred” with the people (https://edition.cnn.com/2019/10/09/business/nba-china-partners/index.html)?

ESPN makes millions every year off the NBA in China. It is owned by Disney, which has a huge Chinese stake with movies, theme parks and merchandise.

Basketball is hugely popular here. I can tell Chinese that I’m from Oklahoma and they look at me funny. But, if I say I’m from the home of The Thunder, Oklahoma City’s NBA team, they light up like candles and start reading off who the players are.

Adam Silver and Daryl Morey are not sorry for what they said, because they are racists. Westerners are clueless about their subtle racism, because they are so imbued with their sense of superiority, compared to the rest of humanity. I call it the Western Racist Superiority Paradigm, which tells us that (https://chinarising.puntopress.com/2019/09/02/belt-and-road-initiative-bri-donald-trump-and-the-falsity-of-imperialisms-narrative-why-bri-is-the-perfect-opportunity-for-china-to-neutralize-500-years-of-the-wests-racist-super/),

And based on this millennial paradigm, Westerners have the God-given right to commit what I call, The Six Es of Western Racism, namely,

For 3,000 years, Westerners have been conquering others’ lands (Expansionism), then stealing them (Expropriation), plundering their natural resources (Extraction), genocidally wiping out the local natives (Extermination), making human property out of the survivors (Enslavement), all the while convincing the survivors and citizens back home just how noble and superior Westerners are to everybody else (Evangelism), because the aforementioned three paradigms are a fact of life. It is so much a part of Westerners’ DNA that 99.9% of them internalize and normalize it, including so-called liberals, leftists, progressives, populists – not to mention millionaire NBA representative and players.

Israel’s relentless, daily genocide in Palestine? Who gives a shit in the West? Destroying and plundering Iraq, Syria, Libya (I’ll stop there, the historical list could fill a hard drive) and killing many millions of innocents with genocidal sanctions, blockades and piracy, like Venezuela, Cuba, North Korea (again, this list fills books)? No one in the West is marching against these blatant, daily crimes against humanity, but hey – they’ll go hold up posters supporting clean air, LBGTs and post tweets in support of CIA financed rioters in Hong Kong (https://chinarising.puntopress.com/2019/07/08/confucius-laozi-and-buddha-are-humbly-winning-against-the-imperial-west-in-troubled-hong-kong-china-rising-radio-sinoland-190708/ and https://chinarising.puntopress.com/2019/07/20/wests-hong-kong-color-revolution-still-making-a-mess-of-the-place-and-totally-backfiring-china-rising-radio-sinoland-190720/). Never mind Western citizens’ owners foment all these identity politics, so they can keep on raping countries and their natives across the globe, while making the homefolk poorer and more terrorized by the day.

My Chinese friends complain about all the grotesque racism they experience when working with clueless Westerners, who blissfully express this racist superiority paradigm. When I talk about it with Westerners, 99.9% are in total denial. The cognitive dissonance is overwhelming. They can’t see it and refuse to recognize it. They have been brainwashed since the womb, in school, business, media, and Hollywood. I wrote a very telling article about this very problem, which you should read (http://chinarising.puntopress.com/2017/11/10/all-the-chinese-people-want-is-respect-aretha-franklin-diplomacy-on-china-rising-radio-sinoland-171110/).

Send it Adam Silver and the NBA owners and general managers. They are just as cluelessly racist as the rest of them. You can also send them this article, which shows that Western racism against the Chinese has been going on for a long time (http://chinarising.puntopress.com/2018/01/06/slavs-and-the-yellow-peril-are-niggers-brutes-and-beasts-in-the-eyes-of-western-empire-china-rising-radio-sinoland/).

I’ll tell you how utterly clueless Adam Silver is about his internalized racism. Here is what he said on his way to Shanghai, to meet with former Houston Rocket star, Yao Ming, who is now the Chairman of the China Basketball Association (CBA),

I’m hoping together Yao and I can find an accommodation, but he is extremely hot at the moment and I understand it.

“Extremely hot at the moment”? No, Adam, you don’t get it. There will be no “accommodation” with Yao Ming or China’s 1.4 billion citizens.

It is inevitable that people around the world — including from America and China — will have different viewpoints over different issues.

About the sovereignty and territorial integrity of a country? How can you be so stupid, Adam? Did you forget about the Civil War? Oh yeah, I almost forgot – you are just another arrogant, racist fool. Unfortunately for the NBA, your Western millennial racism is going to cost your cozy club of multimillionaires a boatload of money.