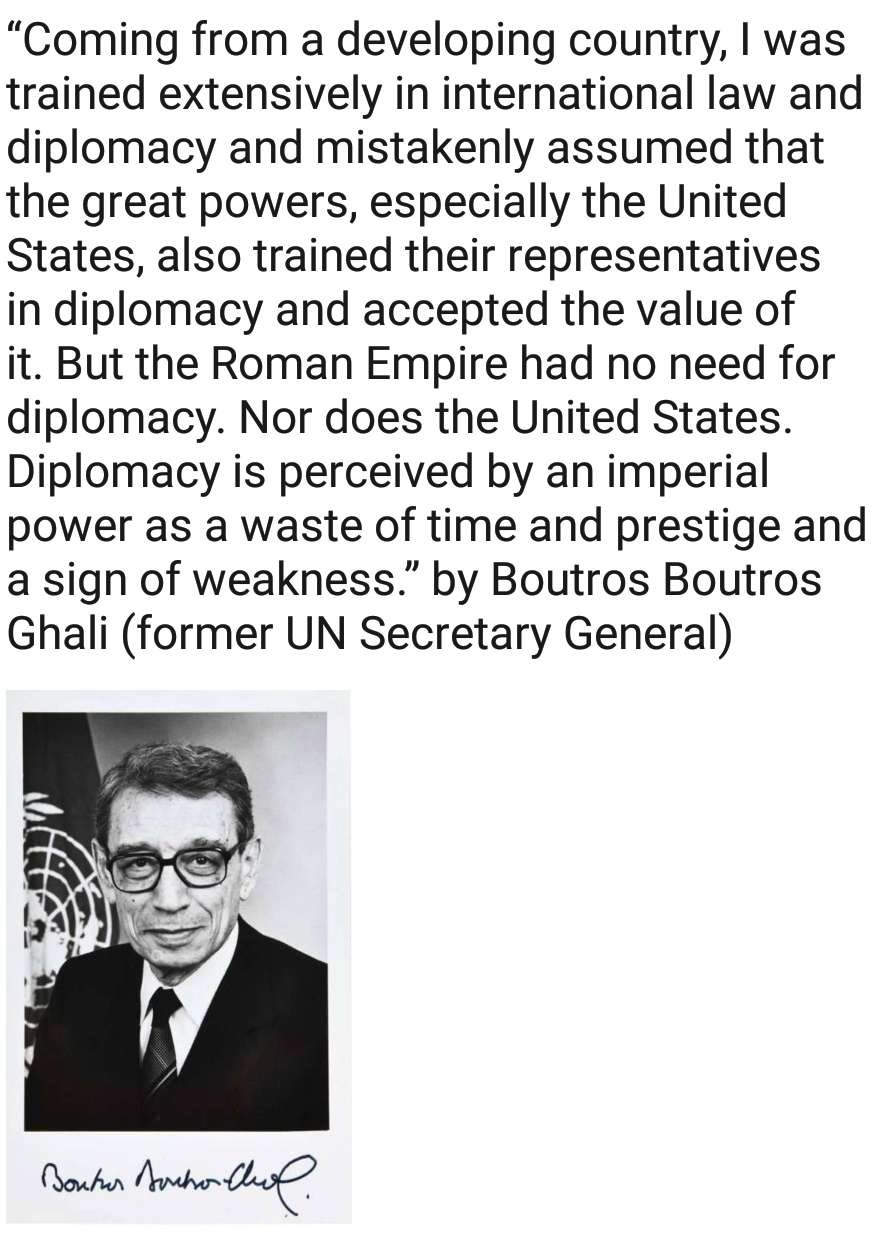 Pictured above: some people have firsthand experience surviving the West’s psychopathic exploitation of the world’s 99%. Former UN General Secretary Boutros Boutros-Ghali was one.


Note before starting: everything you wanted to know about Covid-19, chemical and biowarfare, but were afraid to ask? Now is your chance to step outside the Great Western Firewall.

The fact that coronavirus/Covid-19 originated in the United States and was spread around the world from there makes perfectly good sense, and people are starting to talk about it publicly.

Even the director of the US Center for Disease Control (CDC), Dr. Robert R. Redfield fessed up. He is an expert virologist (someone who studies viruses), so I think he is qualified to talk about the origins of coronavirus (https://www.rt.com/news/482990-china-coronavirus-us-come-clean/ and https://twitter.com/zlj517?ref_src=twsrc%5Etfw%7Ctwcamp%5Etweetembed%7Ctwterm%5E1238111898828066823&ref_url=https%3A%2F%2Fwww.rt.com%2Fnews%2F482990-china-coronavirus-us-come-clean%2F and https://www.unz.com/article/coronavirus-the-plot-thickens/). Being an honest and principled scientist, he may regret telling the whole world the truth, because it is so damaging to Eurangloland’s Big Lie Propaganda Machine (BLPM) global brainwashing.

But, what the hey, the BLPM will keep saturating the 24/7 MSM with violent/fake false flags, transgenders, guns, God, Muslims and immigrants. This is to scare the bejeezus out of you, so that the real truth will be flushed down Memory Hole just that fast – unless of course you’re a friend, fan or follower of China Rising Radio Sinoland – so stay tuned.

Am I surprised? Of course not! The “Spanish” flu was 100% Uncle Sam (http://limpia.centroeu.com/how-the-us-army-infected-the-world-with-spanish-flu/). H1N1 was all-American. It infected 1.6 million people around the world and killed 380,000. (https://chinarising.puntopress.com/2020/02/18/transcript-kevin-barrett-hosts-jeff-j-brown-on-his-truth-jihad-radio-show-covering-all-aspects-of-the-coronavirus-outbreak-china-rising-radio-sinoland-200209/). Kevin Barrett caught a serious case of Lyme disease. On his show, the bioengineer of this Frankenbug broke down in tears, admitting it was a US laboratory creation. The US government owns the patent on the Ebola virus. All-American Rockefeller Foundation owns the Zika virus (https://chinarising.puntopress.com/2020/03/04/almost-100-of-all-covid-19-deaths-around-the-world-are-ethnic-chinese-sars-was-96-why-almost-no-whites-blacks-browns-reds-and-other-yellows-what-does-this-tell-us-you-need-to-know-the-truth-ch/). British Pirbright Institute owns the patent for coronavirus, which is funded by world class American eugenicist Bill Gates (https://outbreak.news/2020-01-27-bill-gates-funded-pirbright-institute-owns-coronavirus-patent.html). A UN expert confided to investigative journalist Wayne Madsen the belief that AIDS/HIV, H1N1 and Ebola are military bioweapons (http://www.natap.org/2009/newsUpdates/042809_01.htm). Madsen said they even dug up an Inuit woman’s body, who had died from the 1918 flu pandemic, to use her DNA to develop H1N1, for maximum lethality. It’s life imitating science fiction horror movies.

Speaking of military germ warfare, is America’s DARPA (Defense Advanced Research Projects Agency) capable of creating coronavirus haplotypes (bioengineered varieties of the same microbe) to attack specific ethnicities? Of course, it is! Their job is to exterminate global capitalism’s enemies by the millions. They are the ones caught creating Frankenstein bat coronaviruses (https://chinarising.puntopress.com/2020/03/04/almost-100-of-all-covid-19-deaths-around-the-world-are-ethnic-chinese-sars-was-96-why-almost-no-whites-blacks-browns-reds-and-other-yellows-what-does-this-tell-us-you-need-to-know-the-truth-ch/) – not China or anybody else.

Would DARPA test (coronavirus) bioweapons on its own citizens? What a silly question. Of course, they do! They’ve been doing it nonstop for seventy years (http://chinarising.puntopress.com/2018/03/31/the-face-of-western-imperialism-exposed-by-ebola-from-china-rising-capitalist-roads-socialist-destinations/). Why would they stop now? DARPA, like the CIA is a top-secret Death Star, totally impervious to any US or global laws. Dr. Leonard A. Cole did years of research on America’s government using bioweapons and killing its own citizens, like laboratory guinea pigs, and filled a whole book with the evidence, Clouds of Secrecy (https://www.amazon.com/Clouds-Secrecy-Armys-Warfare-Populated/dp/082263001X). He has also written several other books about these crimes against humanity, in case you are still not convinced (https://www.amazon.com/Leonard-A-Cole/e/B000APY7YU/).

Back to today’s headlines, we have never seen a global flu epidemic map like the current one, only seriously affecting China, Iran and Italy and everybody else around them is relatively unscathed, although cases are starting to increase in Spain and France, which seems to fit a geopolitical pattern with the others.

Iran is a mortal socialist-Muslim, anti-imperial enemy and the US bullied socialist-rebel Italy for months and months to keep it from joining China’s visionary Belt and Road Initiative (BRI). Italy was the first G7 member to officially sign a BRI MOU (https://en.setopati.com/political/142581). The psychopath neocons back on the Potomac were livid. When their imperial superiority is challenged, they always get revenge.

If you think the above is just conspiratorial coincidences, be my guest.

Do any of you honestly accept the statistical improbability – I’d say impossibility – of three Malaysian airplanes mysteriously going down in nine months? Does the fact that Malaysia is the only country that had the moral courage and civilizational integrity to convict Western leaders and imperial countries (George W. Bush, Dick Cheney, Tony Blair, Israel, et al.) of war crimes in its Kuala Lumpur War Crimes Commission have something to do with it (https://en.wikipedia.org/wiki/Kuala_Lumpur_War_Crimes_Commission)?

Again, if you think the above is just conspiratorial coincidences, be my guest (https://chinarising.puntopress.com/2016/12/10/trump-kissinger-xi-putin-and-duterte-connecting-the-dots-and-what-it-means-for-all-of-us-china-rising-radio-sinoland-161210/).

I got smart starting in 2010, when I saw video footage of the WTC-7 skyscraper coming crashing down in freefall on 9/11 (https://chinarising.puntopress.com/china-rising-the-book/).

Franklin D. Roosevelt was a lot smarter than me and figured it out much sooner in life than I did, saying,

In politics, nothing happens by accident. If it happens, you can bet it was planned that way.

Given all that FDR dealt with globally, it’s safe to assume he meant geopolitics too.

As my good friend Dr. Moti Nissani (whom I’ve had on CRRS several times – https://chinarising.puntopress.com/search/?q=moti%20nissani) says, our global gangster banksters unblinkingly kill anyone who stands in their way and if someone manages to harm or insult them – even if is only done between them and not widely known – they get revenge, usually very publicly (think JFK/RFK/MLK/MX and on and on), as a warning to everyone else.

This is the ugly truth that everybody avoids confronting,

Eurangloland is a criminal gangland civilization and treats its citizens and the rest of the world like loan shark slaves. As Godfree Roberts (whom I’ve had on CRRS many times (https://chinarising.puntopress.com/search/?q=godfree%20roberts) likes to remind everyone, this culture has been developing since the Roman Empire. If you read books like Savage Anxieties: The Invention of Western Civilization, by Native American Robert A. Williams, Jr. (https://www.amazon.com/Savage-Anxieties-Invention-Western-Civilization/dp/0230338763/), you learn that the Romans simply “improved” on the criminal, oligarchic gangster Greek model. I have written much about all this historical perspective, up to today’s headlines, in The China Trilogy (see below).

It’s who Westerners are.

It’s what they do.

It’s how they treat their own and the rest of the world.

Eurangloland being humane and empathetic is a macabre oxymoron. Like Fannie Lou Hamer (who died too young on this day in 1977 – https://kinginstitute.stanford.edu/encyclopedia/hamer-fannie-lou – may she rest in peace), I’m sick and tired of being sick and tired of all the endless moral equivocations, rationalizations and denials of this etched-in-Gneiss rock reality. Sorry, China is Confucist-Daoist-Buddhist-communist-socialist. The Chinese are diametrically different than Westerners. Always have been. Period. End of subject.

What’s truly sad is the BLPM is such a miracle of brainwashing, that many global anti-imperialists and 99% of Western “liberals” and “progressives” never cease trying to make an idealized, sanitized silk purse out of this bloody, genocidal pig’s ear. They probably never heard of Wall Street lawyer Frank Wisner. He was the CIA’s (Central Intelligence Agency) first Chief of Political Warfare (yes, that is the job title). He loved to brag that being able to brainwash the whole world was like playing the Agency’s “Mighty Wurlitzer”, which if you don’t know, is a famously huge electric organ found in churches, music halls and public venues the world over. 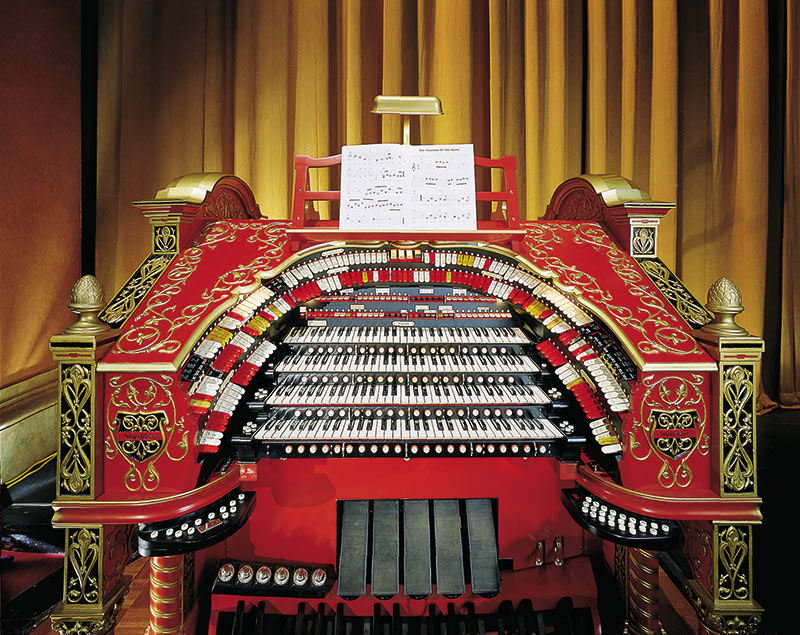 The Mighty Wurlitzer organ is a great metaphor for how the BLPM enables Western oligarchs’ exploitation of their own 99%, the rest of humanity and all their natural resources. Above: the organ is Planet Earth. You are one of those keys. Your country is a foot pedal.

In spite of Wisner & Co., the true, hands-on leaders and rulers of Eurangloland, some people have been able to step outside the Great Western Firewall. Unlike his socialist predecessor, Dag Hammarskjöld (https://www.theguardian.com/world/2019/jan/12/raf-veteran-admitted-killing-un-secretary-general-dag-hammarskjold-in-1961), former UN General Secretary Boutrous Boutrous-Ghali managed to not get assassinated by the West’s deep state. He said,

Coming from a developing country, I was trained extensively in international law and diplomacy and mistakenly assumed that the great powers, especially the United States, also trained their representatives in diplomacy and accepted the value of it.

But the Roman Empire had no need of diplomacy. Neither does the United States.

Diplomacy is considered by an imperial power as a waste of time and prestige and a sign of weakness.

3 thoughts on “Coronavirus/Covid started and propagated in the United States. The US CDC director even says so! Then some serious thoughts about what it all means for your future. China Rising Radio Sinoland 200314”