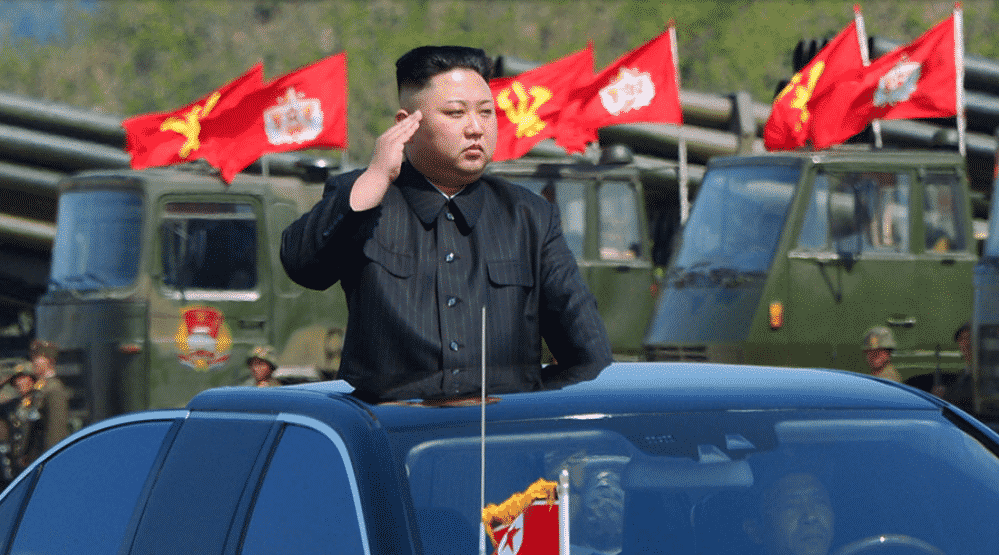 Pictured above: DPRK leader Kim Jong-un is savagely and incessantly portrayed by the West’s symphonic, CIA mainstream propaganda machine, as a fool and a nut. In fact, he is an extremely intelligent and imminently qualified person who knows exactly what he is doing: making sure his citizens and country are not turned into another terminal Western cancer, like Iraq, Libya, Syria and too many others to begin counting. Kim is shown above leading a military parade in Washington. Just kidding. [dropcap]I[/dropcap] read the text of General Liu Yuan’s closed-door speech to the Chinese Military Commission (CMC). He wanted to warn all of us in the leadership about what happened in Libya, of all places. But he has a strong point. Colonel Muammar al-Qaddafi’s second-oldest son, Saif Al-Islam, got intoxicated in European universities with ideas about Western democracy, human rights and political reform. Saif swallowed his ideological brainwashing at the London School of Economics, probably with the help of undercover CIA-MI6 NOCs (non-official covers). Liu reminded his audience that many of our sons and daughters have gone or are going to these same Western schools.

Unfortunately for the Libyans, Saif’s father foolishly listened to this Siren message from hostile Western forces, the same ones who want to destroy China’s socialist way of life. Thus, these poisonous ideas were adopted by father Muammar. The Colonel disarmed Libya and shut down its nuclear program in 2003, thus paving the way for the imperial West to invade and destroy the country in 2011, while gruesomely killing the Colonel himself, for all the world to see. The West also stole the 200mt of gold ingots that were in Libya’s central bank vaults. Before that, Libya was a beacon of anti-capitalist hope for the disadvantaged masses in Africa, as well as a socialist paradise. No longer. Now it is a hell hole.

Let yourself be disarmed by the West and you open your country to invasion, occupation, destruction and the murder of your leadership. Look at what happened to Iraq and Saddam Hussein. As soon as he abandoned the country’s nuclear ambitions and got rid of his chemical weapons, he signed his death warrant and ushered in the genocide of his people and the destruction of his country. Mark my word. Next up will surely be Syria. The West will pull off some kind of false flag to force Bashar Assad to get rid of Syria’s chemical weapons, so it can move in for the kill and plunder.

The West is cowardly and only attacks and preys on weaker countries that cannot defend themselves. NATO is truly the world’s wolf hiding under a sanctimonious, imperial coat. This is why North Korea needs its nuclear deterrent and we will make sure they keep it. Kim Jong-un is a smart patriot who loves his country and is doing what has to be done to prevent the West from massacring millions of his fellow citizens, just like the US did in the Korean War, all crimes against humanity. He knows exactly the mistakes Saddam and Qaddafi made. Thank goodness Comrade Kim is there to protect his nation and keep a friendly buffer between China and hostile Western forces. Otherwise, we would have our very own Iraq+Libya right on our border. We can never let that happen.

I predicted this would happen and it did. The West pulled off a false flag chemical attack in Syria today. They will now put so much international pressure on Assad, using globally orchestrated, Big Lie mainstream propaganda, that he will be forced to get rid of his stocks. And like Saddam in Iraq and Gaddafi in Libya, as soon as he does, NATO will pull out all the stops to destroy Assad and his country. Assad’s only chance of survival is if the Russians guarantee Syria’s freedom, in return for giving up its deterrent.

After 36 years, DPRK is having its Seventh Congress of the North Korean Workers’ Party. Hard to believe that the last one was held in 1980. Kim Jong-un is going to officially become the top-ranking leader of the party. He is a no-nonsense man who works hard to protect his people from foreign aggression, like what the West did to Iraq, Libya and Syria. Until the Americans send home all their troops and close down their nine military bases in the south, taking with them their undeclared nuclear weapons, while signing a peace treaty to end the Korean War, DPRK has no other choice than to develop its nuclear capability. Under these one-sided circumstances, we will make sure comrade Kim continues to do so. And of course, our Russian allies fully agree and work towards the same ends.

Note: Jeff has been very active about reporting on the Korean peninsula. Learn how the world really works:

One thought on “Why DPRK will N-E-V-E-R stop its nuclear arms program, China Rising Radio Sinoland 20170828”