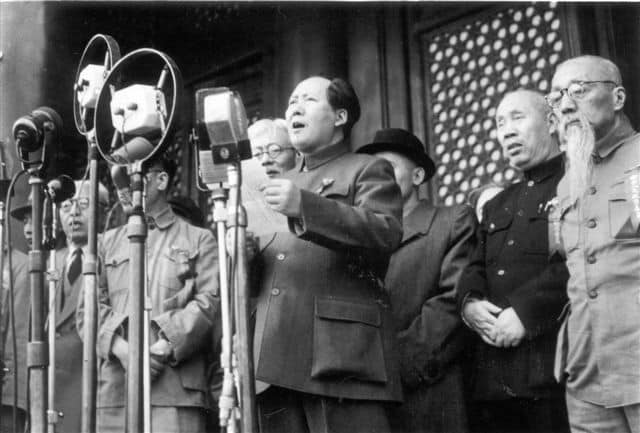 Pictured above: the speech that changed the world forever, Mao Zedong’s proclamation of liberation, on October 1st, 1949. Bordering countries, such as Afghanistan, Myanmar, Korea, Vietnam, Laos and nearby Cambodia have suffered the most horrific imperial consequences of being China’s neighbor, including war and genocide at the hands of Eurangloland – all to try to contain New China and bring down its communist government.

Thus, when China kicked out all the Western opium dealers, banks and other capitalist institutions after 1949, the common refrain in Eurangloland was that it had “lost” China to communism (http://www.history.com/this-day-in-history/mao-zedong-proclaims-peoples-republic-of-china). You can’t believe you lost something, if you don’t think you owned it and it belonged to you in the first place. That’s how imperialists think. They have reptile brains. And it wasn’t a little Cuba or Vietnam. China was 25% of the world’s people at the time, and its land area is as big as the United States’ and Canada’s. As a result, Eurangloland went into a fever pitch of hysteria, genocide and crimes against humanity, in Korea in the 1950s (http://chinarising.puntopress.com/2017/07/29/americas-big-lie-about-bioweapon-crimes-in-korea-tom-powell-on-china-rising-radio-sinoland-170729/) and Southeast Asia in the 1950s-1970s, destroying Korea, Vietnam, Laos and Cambodia, along with massacring over 10,000,000 innocents, to try to contain and hopefully overthrow the Communist Party of China. The Pentagon Papers clearly spell out that the West’s bloodthirsty inhumanity in Korea and Southeast Asia was all about containing China (https://journal-neo.org/2015/10/18/rastushhee-vliyanie-kitaya-i-igra-vashingtona/).