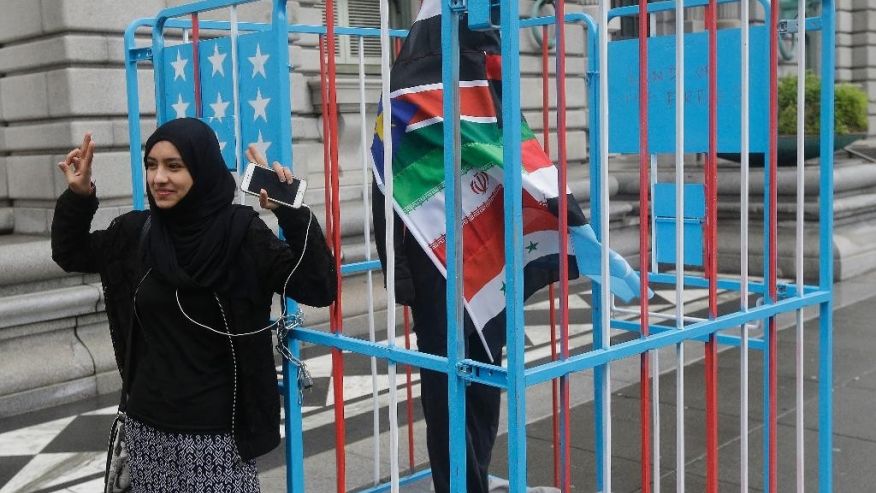 Pictured above: Baraah Alawdi, originally from Yemen, poses for photos next to an unidentified artist’s mannequin placed outside of the 9th U.S. Circuit Court of Appeals in San Francisco, Tuesday, Feb. 7, 2017. She is protesting President Trump’s travel ban on seven predominately Muslim countries. Why isn’t she organizing and protesting the Western and Israeli genocide of her Muslim brethren, across the Planet Earth, instead? The vast majority of these protestors are imperial pawns. (Image by AP)

It is really, really hard not to get frustrated and even angry at the spectacle of millions of people demonstrating about refugees fleeing to seemingly safer, more stable pastures and now, marching against President Trump’s six-month entry ban, from seven predominately Muslim countries. Don’t get me wrong. Many of them are sincere and mean the best for social equality and justice. But scratch below the surface and it is all very emblematic of what a huge predicament humanity is in.

First, many happenings and events that transpire in the 24-hour news cycle are not spontaneous and organic, including all the ongoing pro-refugee and anti-travel-ban protests. The fact is, like false flags, they are likely commanded, controlled and financed by the governments of the citizens concerned, either directly or via proxies, NGOs, foundations, etc. And as much as we all deny it, in our heart of hearts, we know that our leaders and our “democratic” systems are corrupted and controlled by deep state manipulators, puppeteers and eminences grises, the ones who really run the show. They being Wall Street transnationals, oil bankers, generals, spies and the always obedient, purchased and sold out mainstream media pushing their slick propaganda in the oxymoronic “free press”.

We refuse to talk about it, deal with it, react to it, much less try to change it, or even more daunting, overthrow it. Why? Because the bitter truth about our myths and ideals would come shattering down, exposing everything we’ve been brought up to stand for, as hollow lies and cynical Kabuki theater. It’s much, much easier to be complacent and apathetic, living the cozy life of super-consumer sheeple. Why get out of that “civilized” cocoon, where it’s comfortably numb (to quote a great, truth-telling song by Pink Floyd https://www.youtube.com/watch?v=x-xTttimcNk). Inside, life is full of mostly unnecessary, material fluff and stuff, with our brains bathed in vapid TV shows and unending, eye-candy movie sequels. Real, organic contentment and intellectual fulfillment can take a hike. Hasta la vista, bay-bee. It’s a brave new world.

All those millions of refugees pouring in from the exploited global South, namely Latin America, Africa and the Middle East – are no accident. Our deep state owners are greedily using these victims of Western wars, murderous sanctions and trade policies, to drive down salaries and benefits among the native populations, and to further pummel trade unions into Potemkin paper tigers. Our owners also exploit racism and the timeless, imperial strategy of divide-and-conquer, to polarize society towards the extremes of anarchy and ultra-nationalism, in order to drown out reasoned voices, justify police state fascism and the renunciation of daily freedoms and dignities. This whole scenario is brilliantly and pithily spelled out by Mr. Jimmie Moglia, who shows that the manufactured refugee “crisis” is nothing more than a carefully scripted war on the poor, by the poor, for the enrichment of our Western owners. http://www.greanvillepost.com/2017/02/08/war-among-poor-new-world-order-shills-ambush-a-whole-generation/ Our masters play for keeps. They want it all and with capitalism as king, that means all of Mother Earth and her inhabitants. Nothing less is acceptable and nothing much has changed during 8,000 years of sedentary humankind; I’ll avoid using sedentary civilization, as a gesture of literary honesty.

Protesting Trump’s six-month ban on travelers from Iran, Iraq, Libya, Somalia, Sudan, Syria and Yemen is akin to being outraged – simply outraged! –  that a serial, suppurating, AIDS-chancred rapist does not leave roses for his many victims. Why are all these protesters not screaming and marching against the West’s genocide, annihilation and attempted dismemberment (successful in Sudan) of these seven countries, their peoples and their ways of life?

We can go back to at least 1980, when the US used and goaded Iraqi President Saddam Hussein into invading Iran, as proxy punishment for the Iranians having the temerity to overthrow the West’s harlot Shah Reza Pahlavi and then humiliating empire, by occupying the American embassy in Tehran, full of hostages, for all the world to see. The United States and Western Europe then gleefully sold chemical weapons to Iraq, which are of course supposedly banned by “civilized” countries. Uncle Sam then happily provided the Iraqi army with real time satellite photos, so it could pinpoint targets in Iran, gruesomely massacring hundreds of thousands of people.

Iran, like most other countries that maintain their independence and sovereignty from Western control (China, Cuba, Eritrea, North Korea, Russia, et al., the list is long http://www.bscn.nl/sanctions-consulting/sanctions-list-countries) has been keeping its head high and its dignity intact, in spite of inhumane economic, financial and informational sanctions, which have cost its people daily suffering, shorter lifespans and death. These Western sanctions have been cruelly enforced, since the Iranians’ revolution of liberation from Western tyranny, in 1979.

Why are all these Muslim people and “civilized” Westerners across the globe not loudly protesting the genocide, annihilation and destruction of the Palestinian people, at the hands of racist, apartheid Israel? Why are they not organizing a global BDS (boycott-divestment-sanctions) to fight Israel’s genocidal crimes against humanity? https://bdsmovement.net/ Why are they not pouring into the streets by the millions, demanding Nuremberg trials against every American president since Eisenhower, as well as prosecuting their enabling Western prime ministers and presidents, such as Tony Blair and Nicolas Sarkozy, not to mention Benjamin Netanyahu? http://www.goodworksonearth.org/ramsey-clark-indictment-george-w-bush-2006-06-15.html

Why are they not storming the embassies of the West and Israel, showing outrage at the imperial extermination of millions of their brothers and sisters? How about blockading all their national versions of the White House and Congress? What about the living, those who bravely survive Western and Israeli wars and colonialism? Shouldn’t they rather be taking concrete action for these tens of millions of Western and Israeli victims, who are existing in homelessness, hunger, sickness and misery (Iran’s independence helps mitigate many of the crises)?

For the uncounted, ignored-in-the-West millions of dead Iranians, Iraqis, Libyans, Somalians, Sudanese, Syrians Yemenis – and Palestinians, along with their wounded, handicapped and destitute brethren, do they really give a rat’s ass about green cards, H1-B visas, or counting their frequent flyer miles?

With all due respect, the vast majority of these protesters are brainwashed, misguided, imperial pawns. It’s enough to gag a maggot.