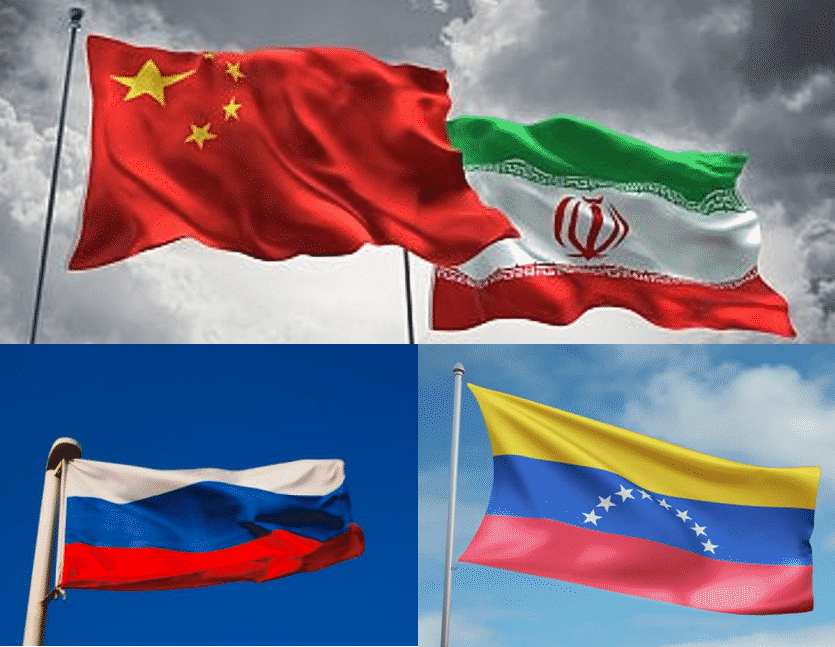 Pictured above: Ahh… What happened to the good old days of the Cold War, when rich, imperial America was doing battle with poor, agrarian Russia and China, and Iran and Venezuela were corrupt, fascist regimes serving the interests of American capital? Those days seem so long, long ago!


[dropcap]T[/dropcap]here was time, 1945-1990, when America ruled the noncommunist world like a brutal gang leader, bullying its many poodle states with unlimited military and financial power, whipping and threatening them into obedience. The joke in postwar diplomatic circles still is that the United States doesn’t have any friends, just clients, and abused, browbeaten ones at that. My, oh my, how times have changed.

Russia has gone from a “Chicago Boys” disaster-capitalism-failed-state to an independent, confident, economically growing, superior military global power (http://www.4thmedia.org/2016/09/clinton-russia-has-us-media-forgotten-the-1990s/). Russia beat the West hands down in Ukraine, reabsorbing Crimea and essentially doing the same with the eastern third of the country. Except for most of Eastern Europe, Russia has kept much of the former USSR in military and economic unity (http://chinarising.puntopress.com/2016/04/02/the-china-russia-alliance-is-in-full-bloom-if-you-know-where-to-look/). With quiet support from China, Russia has whipped NATO in Syria and will now likely to turn towards Iraq. America has been working overtime to split India and Brazil away from their commitment to BRICS, but the Bear and the Dragon came out even stronger, and BRICS never more cohesive, after the recent summit in Xiamen, China, earlier this month (http://chinarising.puntopress.com/2017/09/07/brics-is-euranglolands-canary-in-the-imperial-mines-china-rising-radio-sinoland-170907/).

China is nominally the second largest economy in the world and in purchasing power parities (PPP), is the king of the globe (http://www.businessinsider.com/china-overtakes-us-as-worlds-largest-economy-2014-10). It too has a modern, fearsome army with technology running out the yazoo. Did you know “yazoo” is a Chinese word? It means, “Uncle Sam can kiss my sweet yellow ass goodbye”. Just kidding.

America’s ridiculous incursions into the South China Sea, in a show of force against Baba Beijing, have turned into an embarrassing farce, as “the greatest deep-water navy in the Milky Way” has had four serious accidents this year, causing a number of deaths and much physical and reputational damage (https://www.nytimes.com/2017/08/21/world/asia/navy-ship-mccain-search-sailors.html). Speculation that China’s increasingly sophisticated navy has caused these mishaps, with cyber jamming and/or false GPS signals, as an elliptical retort, has to be taken seriously (http://sonsoflibertymedia.com/us-navy-suspects-uss-mccain-collision-caused-cyber-attack/). If true, it would be a hallmark Sino-reaction to boisterous bullying in its own backyard. Don’t believe me? Check out the fifth of the 36 Stratagems of War, “Loot a burning house”, for
starters (http://changingminds.org/disciplines/warfare/36_strategems/36_stratagems_5.htm). The USS Fitzgerald, badly damaged and killing a number of American sailors, is just one of four serious US naval accidents this year. Did China cause them by cyber jamming? Or, is the US navy just that incompetent?

As America’s dictatorial grip on its poodle states weakens, Russia and China are no longer the poor, mostly agrarian communist countries that were cut off by the West during the Cold War. Back then, imperial America kept these two red giants isolated, while it robbed the developing world with impunity, thanks in large part to the World Bank and International Monetary Fund (http://library.uniteddiversity.coop/Money_and_Economics/confessions_of_an_economic_hitman.pdf), and was able to use all that human capital and natural resources to churn out half the world’s GNP. The United States was the Planet Earth’s biggest exporter, creditor and manufacturer. The US dollar was first tied to the gold standard, then the OPEC oil barrel (https://www.thebalance.com/what-is-the-history-of-the-gold-standard-3306136).

Those days are long gone, bay-bee. Now, China’s GNP is leapfrogging America’s. China is the world’s biggest exporter, creditor and manufacturer, while America is the world’s largest debtor and can brag about the hugest trade deficit black hole in the universe. Russia and China are the two biggest gold miners and both countries are more and more selling and buying hydrocarbons and everything else in their own currencies, diminishing the US dollar’s status as the world’s reserve currency (http://chinarising.puntopress.com/2016/04/19/shadow-of-truth-jeff-brown-in-beijing-why-does-the-west-fear-china-16-4-13/). China and Russia are starting to really pile it onto the greenback. China is the world’s biggest oil and gas importer and Baba Beijing just announced a Chinese renminbi denominated oil contract backed by convertible, physical gold (http://russia-insider.com/en/politics/game-changer-china-buy-oil-gold-backed-yuan/ri20807).

As a result, from continent to continent, America is desperately playing “whack-a-mole” with these two Asian allies. China is a huge supporter of socialist Venezuela, loaning it tens of billions of dollars to build low income housing, hospitals, schools and connective infrastructure. The terms are soft and Venezuela pays it back in oil. As the American color revolution to overthrow Venezuela’s anti-West government and mass support for independence has taken its toll, Baba Beijing is playing it cool with the loan repayments, to offer relief to the people, while continuing to build and build (https://www.ft.com/content/18169fbe-33da-11e6-bda0-04585c31b153). At the current United Nations confab, where Donald Trump showed America’s true, longstanding imperial colors (http://www.greanvillepost.com/2017/09/20/trumps-mein-kampf-tirade-at-the-united-nations/), China is showing open support for Venezuela and its longstanding opposition to the West’s incessant color revolution playbook (http://www.reuters.com/article/us-china-venezuela/china-offers-support-for-strife-torn-venezuela-at-united-nations-idUSKCN1BV0EW).

Then, in a direct threat to the US dollar’s hegemony as the global petro-currency, Venezuela is now pricing its oil in Chinese renminbi (https://www.rt.com/business/403577-dropping-dollar-venezuela-oil-yuan/). After both Iraq and Libya priced their hydrocarbon exports in euros, they got invaded and destroyed by the West. America is trying to do the same via financial war against Venezuela (https://www.telesurtv.net/english/news/Venezuelas-President-Nicolas-Maduro-Rejects-Trumps-Threats-at-UN-20170919-0026.html) and North Korea is building hydrogen bombs to keep safe (http://chinarising.puntopress.com/2017/08/28/why-dprk-will-n-e-v-e-r-stop-its-nuclear-arms-program-china-rising-radio-sinoland-170828/).

Russia is not sitting on its hands in Venezuela, either, loaning the Bolivarian revolution $17 billion, in exchange for oil (https://www.reuters.com/article/us-venezuela-russia-oil-specialreport/special-report-vladimirs-venezuela-leveraging-loans-to-caracas-moscow-snaps-up-oil-assets-idUSKBN1AR14U). In another clarion call for the American dollar’s eventual demise, Russian President Vladimir Putin has just ordered all Russian ports to quit using the greenback as currency, and switch to rubles (https://www.rt.com/business/403804-russian-sea-ports-ruble-settlements/).

Another socialist country that America is trying to castrate and destroy is Iran (http://thesaker.is/iran-socialisms-ignored-success-story/). As soon as the ink dried on the hard fought, multilateral Joint Comprehensive Plan of Action (JCPOA) to limit Iran’s nuclear development, America began reneging on it, with typical imperial exceptionalism (http://www.presstv.com/Detail/2017/09/19/535716/Iran-EU-Britain-IAEA-New-York-Federica-Mogherini-Boris-Johnson-Mohammad-Javad-Zarif-JCPOA).

To say that Russia and Iran are brothers-in-arms is an understatement. Both are fiercely anti-American and rebuke Eurangloland (NATO plus Australia and New Zealand) for its craven obedience to Uncle Sam’s boot heel. Iran and Russia continue to work hand-in-glove to give NATO and its proxy army, ISIS, which really should be called USIS – United States Islamic Satrap – the final death knell it deserves in Syria, while expanding into Iraq. Russian-Iranian trade is exploding, using oil-for-goods swaps (https://www.rt.com/business/389712-russia-iran-oil-goods/ and https://www.rt.com/business/355671-russia-iran-trade-increase/). Russia’s sale of its vaunted – and in the West – much feared S-300 anti-missile system makes any thought of the West’s usual war and plunder game plan in Iran a moot point (http://www.businessinsider.com/why-russian-s-300-sale-to-iran-is-a-big-deal-2015-6). Zionist, genocidal nut job Israel keeps threatening Iran, but now it is all just racist, imperial bluster. At the UN General Assembly this week, Israel’s Prime Minister Benjamin Netanyahu blathered Iran’s name 57 times (http://theduran.com/fact-checking-benjamin-netanyahus-general-assembly-speech/).

China and Iran are also tight as anti-West ticks. Baba Beijing just extended the equivalent of a $10 billion line of credit to Iran, so that China can continue to build infrastructure in-country, denominated in Chinese renminbi and euros, to circumnavigate Uncle Sam’s suffocating and illegal sanctions. This is on top of a previous equivalent $15 billion line of credit and a $4.2 billion one to build Chinese highspeed train lines (https://sputniknews.com/business/201709171057456688-china-10billion-credit-for-iran/).

Even America’s occupied ally, South Korea, got into the act, extending an €8 billion loan to Iran. America’s supine EU clients Austria, Denmark and Germany, are negotiating a $22 billion loan to Iran. Amazingly, the imperial United States is cutting off its nose in spite of its face, even wanting to cancel sales of Boeing planes to Iran (http://ifpnews.com/exclusive/us-ban-plane-sales-iran-runs-counter-jcpoa/). Talk about hubris. Here comes Airbus and eventually China to the rescue (http://aviationweek.com/commercial-aviation/second-comac-c919-flight-imminent-five-months-after-first-flight).

Iranian money talks and American imperial shit walks, when it comes to doing deals, since much of the world is firmly in the capitalist camp. Iran may be socialist, but the Persian people have been trading longer than the ancient Greeks and are business people par excellence. Iran is a country vastly wealthy in hydrocarbons, which everybody wants to buy, while at the same time its wise leadership is creating a rapidly expanding middle class, that wants to buy imported consumer goods and have 21st century infrastructure to boot.

You would never know all this behind the Great Western Firewall, but Americans look like the arrogant, imperial fools that they are. China and Russia are right there to rub their noses in anti-West dog doodoo, while changing the world for the better. Not only better for their citizens, but better for all of humanity.

Better even for Euranglolanders, including Americans. Please break the news to them gently, by posting this article and podcast on your social media, and share it with your workmates, family and friends. They all need to prepare for the happy day of reckoning. Just think of it. The fall of an empire. It’s going to be beautiful. And the schadenfreude? Ode to Joy and lay it on me dah-lun.

Postscript, dateline 2017.10.18: Trump has pulled the US from the JCPOA. Every other signatory, including America’s European poodle states, is surprisingly standing up to Washington. And now a sharp jab from the north. Norway is investing a cool $4 billion in Iran for a solar power project: http://www.presstv.com/Detail/2017/10/18/538979/norway-iran-solar-panel-trump-jcpoa

One thought on “Baba Beijing and Big Bear smack down Uncle Sam in Iran and Venezuela, China Rising Radio Sinoland 20170924”