Pictured above: the assortment of logos created for the Bioweapon Truth Commission Global Online Library (BWTC-GOL). www.bioweapontruth.com will direct the whole world to this page and its hyperlink to the massive BWTC-GOL, presented below.

On June 25th, 1950, Western empire went to war with communist North Korea. Sixty-eight years later, to the date, the Bioweapon Truth Commission (BWTC) is sounding the clarion horns of truth and justice for the many millions of Koreans and Chinese citizens, who were slaughtered and exterminated during what the United Nations called a mere “police action”. The BWTC is also exonerating key players who bravely exposed Western crimes against humanity on the Peninsula, 1950-1953, including the United States’ blatant use of germ weapons on North Korean and Chinese people… These heroes include Zhou Enlai, Pak Hon-yong, Dr. Joseph Needham and the other signatories to the International Scientific Commission Report (ISCR), Wilfred Burchett, John W. Powell and Sylvia C. Powell and too many others to list. For nearly 70 years, Eurangloland’s mainstream media Big Lie propaganda machine has wrongfully sullied and destroyed their honorable reputations. Starting today, June 25th, 2018, for all the aforementioned, the Bioweapon Truth Commission says,

Mark your calendars! June 25th is Bioweapon Truth Commission Day. Give everyone the website: www.bioweapontruth.com


[dropcap]C[/dropcap]ompared to my several books and hundreds of articles, I can say in all honesty that being a founding member of the Bioweapon Truth Commission (BWTC) and the creation of its Global Online Library (GOL) is my proudest publishing achievement. The GOL is already becoming an instant classic and a valuable resource for authors, journalists, educators, students, researchers, libraries, schools, colleges, universities and truth seekers across the globe (we have been doing a soft release the last couple of months), and it will now live in perpetuity, free of charge, long after my death. In spite of Herculean efforts by Western elites to suppress, censor and deny it for the last 70-long years, the evidence is overwhelming that the United States blatantly used Japan’s World War II biowarfare technology to bomb North Korea and China with germ weapons during the Korean War. This was a horrific crime against humanity on top of the many grotesque genocidal horrors that the West perpetrated across the Peninsula, 1950-1953.

And not just in Korea, but Eurangloland (all the Western countries plus Israel) has been using chemical and biological weapons continuously and ongoing since World War I, not just on its perceived enemies, but on its own people (http://chinarising.puntopress.com/2018/03/31/the-face-of-western-imperialism-exposed-by-ebola-from-china-rising-capitalist-roads-socialist-destinations/, as well as check out Dilyana Gaytandzhieva’s ongoing investigations in the GOL. Her articles are amazing). The imperial West reigns supreme, as being by far the largest and most habitual criminal against humanity, using bombs, missiles, nuclear, chemical and germ weapons, even as I write this. Not even the Third Reich and Imperial Japan could come close to Eurangloland’s century of perfidy and genocidal evil.

It’s all right here. Access this database to download everything in the Bioweapon Truth Commission Global Online Library, including thousands of minutes and pages of videos, recordings, images, photos, books and articles. There is information in English, Chinese, Russian, with French and Korean forthcoming:

(note: if clicking on the link doesn’t work, copy and paste it in your search engine address line)

Make this link a favorite in your search engine. Share it with your local libraries, schools, colleges and universities. Here are the GOL directories available for all of humanity, as of 2018.06.13. There will surely be more as the library grows, as well as the content in each one. Just keep clicking on the above GOL hyperlink for ongoing updates: 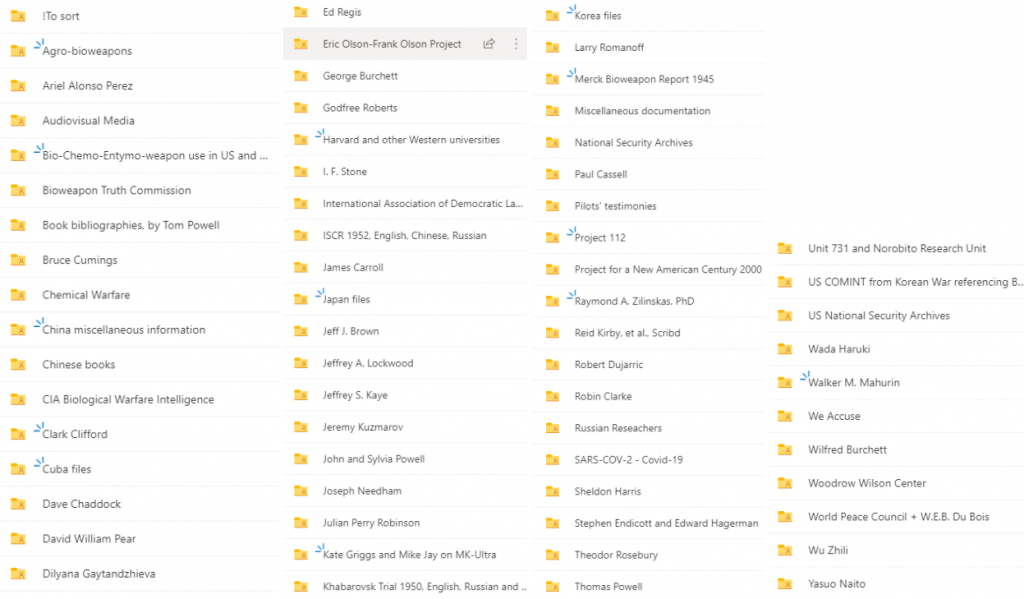 Every person who has contributed to the GOL and needed to, gave us their permission to include their truth telling work in the GOL. Again, come back often to your favorite topics and directories, since like any library, the GOL is constantly growing. It will keep getting bigger and better.

The logos you see above are in the GOL and free to use as well. Their creation is thanks to Emma Chang Yu-Ting, who was born in 2002 in Taipei, Taiwan; she holds an interest in digital design and always aims for uniqueness to distinguish her work. Email her at emmachang2002@hotmail.com, if you’d like to commission her to do any graphic art work. She is young, enthusiastic and very tenacious until the end to finish a project, as was our case, which turned out to be a lot more work than anticipated.

I am pleased to introduce to the world the founding members of the BWTC. Each of us brings unique pasts, experiences, skills and knowledge, that wonderfully complement each other. Our synergies have helped make the BWTC and its GOL the successful creation that it is. David is a progressive columnist writing on economic, political and social issues. His articles have been published by OpEdNews, The Greanville Post, The Real News Network, Truth Out, Consortium News, Global Research, and many other publications. David is active in social issues relating to peace, race relations and religious freedom, homelessness and equal justice. David is a member of Veterans for Peace, Saint Pete for Peace, CodePink, and International Solidarity Movement.

In 2017 David spent 3 weeks in South Korea researching the Korean War of 1950 to 1953. In 2016 David spent 10 weeks in Palestine with the Palestinian lead non-violent resistance group International Solidarity Movement. In February of 2015 he was part of a people-to-people delegation to Cuba with CodePink. In November of 2015 he was a delegate with CodePink to Palestine to show solidarity with Palestinians. David frequently makes people-to-people trips to Russia as a private citizen. David returned to Palestine for 10 days in March 2018.

David resides in Clearwater Beach, Florida. His hobbies include boating, fishing, RV’ing and motorcycle touring. He is also a licensed skydiver (USPA-inactive).

North Korea is not a Threat (https://www.opednews.com/articles/North-Korea-is-Not-a-Threa-by-David-William-Pear-Bush_Iran_Iraq_Korean-Unification-171202-985.html).

US Humiliation of South Korea (http://www.greanvillepost.com/2018/01/14/us-humiliation-of-south-korea/). Godfree Roberts received his doctorate from UMass, Amherst and has worked and lived in a dozen countries. He began visiting China in 1967 and revisits it annually. His book, CHINA 2020: Everything You Know is Wrong, to be released in 2018, re-examines our impressions of China–its governance, economy, human rights, soft and hard power–and demonstrates that most of our ‘knowledge’ is nonsense dreamed up by professional propagandists in the 1950s and amplified over generations. If you want a sample chapter and to be informed when the book is released, sign up at www.inpraiseofchina.com.

Who is Xi Jinping?, China’s Financial Debt, The WTO and China This is a Game We Can Win, 1989: Tiananmen Square Revisited, Selling Democracy to China, Mao Reconsidered, Mao’s Great Famine, The Great Proletarian Cultural Revolution Save some space. My biography is right next door… http://chinarising.puntopress.com/about-the-author/

My journalism related to biowarfare and the Korean War: Jeffrey S. Kaye is a retired psychologist. He received his Ph.D. from The Wright Institute, in Berkeley, California, and a BA in History from the University of California, Berkeley. Dr. Kaye previously worked in private practice, and for some years provided part-time psychological services via Survivors International to asylum applicants who had escaped from torture. He has written about torture and biological warfare issues for The Guardian, Al Jazeera America, Alternet, Firedoglake/The Dissenter, Insurge Intelligence, and Medium.com, as well as his own blog, Invictus. He is the author of Cover-up at Guantanamo: The NCIS Investigation into the “Suicides” of Mohammed Al Hanashi and Abdul Rahman Al Amri. He currently lives in Hawaii.

Secret Report: US Military Approved Offensive Use of Biological Warfare on Enemy Agriculture in World War 2, Medium.com, May 14, 2018

CIA Document Suggests US Lied About Biological, Chemical Weapon Use in the Korean War, The Dissenter, December 10, 2013 Thomas Powell is a sculptor and writer. He is the son of John W. Powell and Sylvia C. Powell who were indicted on charges of sedition in 1956 for denouncing US biowarfare in Korea. Powell has written on a range of topics including the history of gun violence in the US, Hollywood’s pandering of “gun lust”, the mediocrity of public art in the US, and the morally bankrupt philosophy of Friedrich Hayek.

Powell’s articles on US biological warfare during the Korean War include: