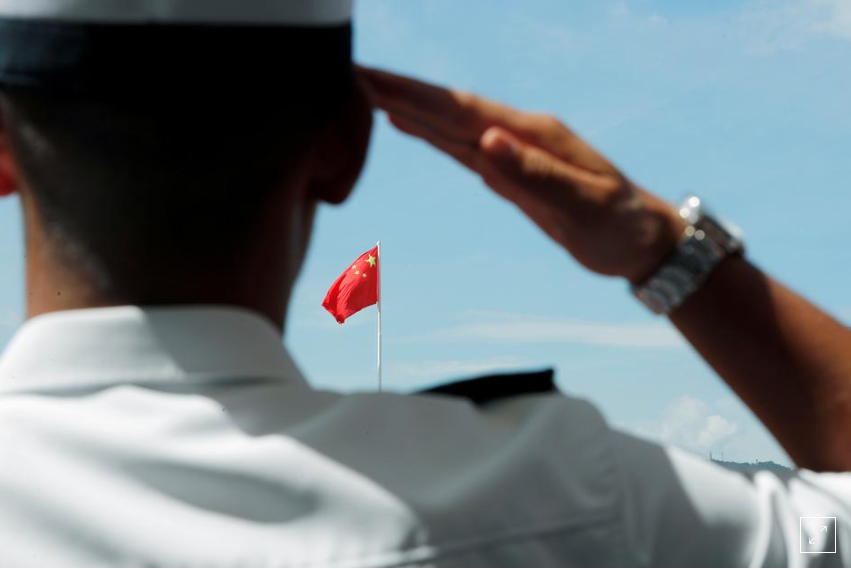 Pictured above: People’s Liberation Army (PLA) soldier saluting Chinese flag, during the daily raising and lowering ceremony, at their base on Hong Kong’s Stonecutters Island. The 1989 Tiananmen Square protests are the CIA’s color revolution template, that has been successfully used around the world for the last 30 years to destroy and take control of anti-imperial countries. It won’t overturn the Chinese people’s communist-socialist way of life, but a 30th anniversary military intervention in Hong Kong would be a powerful Big Lie Propaganda Machine (BLPM) “totalitarian poster child” cudgel to pound the Mainland for another three decades.


Note before starting: when writing CIA, or more correctly the CIA-complex, it includes all the West’s spy agencies, among them MI6 (UK), DGSE (France), BND (Germany), ASIS (Australia), etc.; their Ministries of Foreign Affairs, embassies; thousands of front NGOs, which are financed by the above and by billionaire global capitalists, such as George Soros and Pierre Omidyar. We can also include NATO and its military contractors, the West’s government managed “free press”, as well as transnational corporations, which are full of CIA non-official covers (NOCs), not to mention global and local organized crime cartels, who do a lot of their black ops. It’s all one big Frankenstein family, raping and plundering the world’s human and natural resources, while making the 99% poorer and poorer – you and me.

On July 1st, 1997 Britain finally renounced its 110-year colonial control over Hong Kong (HK). Margaret Thatcher and Deng Xiaoping had hammered out the Basic Law, which set the course for China’s reintegrated Special Administrative Region (HKSAR). The concept was a novel one, One Country, Two Systems, which was to last for 50 years, until 2047. It stipulates that Hong Kong is an inseparable part of China, over which the Mainland has the ultimate right to make all necessary administrative and policy decisions, but the SAR would have a high degree of independence in its legislature and judiciary. On that day, the PLA took over all of Britain’s military properties on the territory’s islands and on the mainland of HK, in Kowloon and New Territories. There are 1-2 divisions of PLA troops there (about 9,000), including small naval and air force detachments. They stay put, raising and lowering the Chinese flag every day and doing military drills to stay sharp. I’ve never seen a PLA soldier on Hong Kong’s streets, so they must change into their civvies when they leave their bases.

I fully explained in The China Trilogy books (see below) how Baba Beijing controls Hong Kong via China’s Standing Committee, the 25-person high-level group of administrators chosen from the country’s legislature, the National People’s Congress (NPC). The West’s Big Lie Propaganda Machine (BLPM) carefully manipulates the mainstream media to give everybody behind the Great Western Firewall the impression that HK is still “independent” and “separate” from China. Never mind that Hong Kong/Canton has been a city in China for thousands of years. It was incorporated into China during the Qin Dynasty, 200 years before Jesus Christ was born and never “left”. Its only distinction is that it was the West’s colonially occupied, international drug (heroin and cocaine) and money laundering capital, 1839-1997, which is nothing to be proud of, unless you are a global capitalist, where these high crimes are just another paragraph in your business prospectus and line items in your financial statements.

Now that Hong Kong is no longer occupied by Western colonialists, if needed and according to the Basic Law, Hong Kong’s government can ask the local PLA garrison to help keep the peace. On the Mainland side, national law says that the PLA would only be used in war, if China’s national security was at risk, or if the Hong Kong government lost control. Either way, this would have to be voted on by the Standing Committee.

Western controlled rioters have been tearing up the place just meters away from some PLA bases. The CIA-complex is ratcheting up the rioting violence and chaos, per Chapter 2 of their color revolution playbook. The West used snipers in 2014’s Maidan, Kiev, Ukraine coup d’état to randomly killing protesters on both sides, in order to create chaos, fear and confusion. In such an atmosphere of terror, thinking citizens become mindless sheeple.

They aren’t using firearms in Hong Kong – yet – since the local mafia, the Triads have smuggled weapons in a country with very strict gun control laws. But, the CIA-complex is using the same method. Check out the two videos below. One shows white-shirted rioters beating people in a HK metro station and the other shows black-shirted rioters beating white-shirted protesters on a street at night. According to the script, white shirts are pro-government and black shirts anti-China.

So, who is who? Is it really black-shirted anti-government thugs and white-shirted pro-China types getting revenge? Or, is the CIA using Triads to represent both sides, to cause Hongkongers to cannibalize each other, like happened in Ukraine? Either way, Triads are for hire to provide protection or muscle, and have no allegiance to anyone, except cold cash. It is an open secret that the CIA-complex around the world works hand-in-hand with organized crime, for its drug/arms/human trafficking empire, extortion, blackmail, assassinations and endless false flags (https://chinarising.puntopress.com/2019/07/02/douglas-valentine-on-china-rising-radio-sinoland-the-cia-is-global-capitalisms-secret-gangster-army-190702/).

It is clear where this is heading. Eurangloland knows it is not going to be able to overthrow the Chinese people’s communist-socialist way of life, although it got close in 1989 (https://chinarising.puntopress.com/2019/05/30/over-100000-people-around-the-world-have-read-this-you-should-too-china-rising-radio-sinoland-190604/ and https://chinarising.puntopress.com/2019/06/04/the-ritualistic-annual-western-flogging-of-the-chinese-people-takes-place-today-china-rising-radio-sinoland-190604/ and https://chinarising.puntopress.com/2019/06/04/morpheus-is-inviting-you-to-leave-the-propaganda-matrix-into-the-light-of-truth-tiananmen-30-year-anniversary/). The next best way to destroy the Chinese is to create so much violence and chaos that the Hong Kong government loses control, thereby forcing Baba Beijing to send out the PLA. This would be a huge loss of face for the Mainland government and a massive, “New Tiananmen Square massacre” that never happened, but would be planted in the minds of people across the world, with the West’s brainwashing BLPM and its bought-for presstitute mainstream media providing “free press authenticity”.

Tiananmen Square is the CIA’s most successful psychological warfare propaganda coup ever. They have convinced most of humanity that the PLA massacred thousands in 1989, which is of course a propaganda lie. It is the anti-communist, anti-socialist, anti-Chinese gift that just keeps on giving and giving, a generation later. They would doing anything to pull off the same thing for the next 30 years, about a fictitious “Hong Kong massacre”. In 28 years, Hong Kong’s SAR status ends, so no Western color revolution can happen thereafter (http://chinarising.puntopress.com/2016/04/30/baba-beijing-lowers-the-communist-boom-on-foreign-ngos-china-rising-radio-sinoland-16-4-30/).

Chapter 3 in the CIA’s color revolution playbook includes wantonly killing innocent citizens. Hong Kong police got intelligence on a planned bombing terrorist plot, luckily stopping it before it could happen (https://www.scmp.com/news/hong-kong/law-and-crime/article/3019429/bomb-disposal-squad-called-after-explosive-substance). Kilograms of powerful explosives were seized, enough to blow hundreds of people to bits. Anti-government riot gear and propaganda materials were also found. One man was caught on site, in the process of cooking the stuff up and two were later arrested. Hopefully, they will talk about who is backing them and paying for all of the gear.

Like I said in my previous HK article, the CIA-complex is going to make it much worse in Hong Kong, before it hits bottom (https://chinarising.puntopress.com/2019/07/20/wests-hong-kong-color-revolution-still-making-a-mess-of-the-place-and-totally-backfiring-china-rising-radio-sinoland-190720/).

Three cheers to Hong Kong’s brave and beleaguered policemen and -women. They and their government leaders deserve medals for practicing Chinese ren, way above and beyond the call of duty. If this were the US or France, thousands of protesters would already be shot at, injured for life and/or in prison.

In closing, I’d like to dedicate the following song to the citizens of Hong Kong. Friends, you are being played like a bad piano by Eurangloland and its global capitalists, who are hellbent on destroying you. As the Rolling Stones’ Street Fighting Man explains, you’re fighting the CIA’s straw man: communist-socialist China. If you want to hit the streets, protest against the West’s worldwide Wehrmacht and the ten billionaire families that own Hong Kong and own you. Your future is going down the tubes because of neoliberalism, not because of Baba Beijing.